David Coleman Director, Wireless Networking at the Office of the CTO Published 7 Jun 2021

In 2019, Wi-Fi technology celebrated its 20th birthday. It is hard to believe that that Wi-Fi has now been around for 22 years. And now, the year 2021, marks Extreme Network’s 25th anniversary – a milestone in any industry. And during most of those 25 years, Extreme has been an industry leader in delivering enterprise-class Wi-Fi networking solutions.

Long before I came to work for Extreme, I ran my own Wi-Fi consulting and training company for 10 years. Over the years, I worked with Wi-Fi solutions from pretty much all the major Wi-Fi networking vendors and acquired a lot of wireless networking equipment for testing purposes in my lab. As a matter of fact, I procured so much hardware that I literally had to buy a bigger home sixteen years ago because my former house was overrun with Wi-Fi equipment.

A few years ago, I decided to finally cleanse my home of the Wi-Fi toys of yesteryear. To celebrate, I decided to write a few blogs about Wi-Fi dinosaurs that are now mostly extinct.

Let’s start with frequency hopping spread spectrum (FHSS)WLAN radios. When the original 802.11 standard was ratified in 1997, three Physical layer specifications were defined. Wireless vendors could manufacture WLAN equipment using either frequency hopping spread spectrum (FHSS), direct sequence spread spectrum (DSSS), or infrared (IR). As far as I know, there never was an 802.11 infrared access point, but WLAN vendors did manufacture both FHSS and DSSS radios. Because these spread spectrum technologies differed, the radios could not communicate with each other and often had a hard time coexisting. The majority of legacy Wi-Fi deployments used frequency hopping, but some DSSS solutions were available as well. 802.11 FHSS access points were primarily deployed in warehouses and used together with wireless handheld devices for data collection and inventory control.

FHSS radios do not transmit on a fixed channel but instead transmit on multiple small channels in a sequence-hopping pattern, as shown in Figure 1. Although the technology is not conducive for bandwidth, FHSS is very resilient against RF interference. Actress Hedy Lamarr and composer George Antheil originally patented FHSS technology in 1942 during World War II. 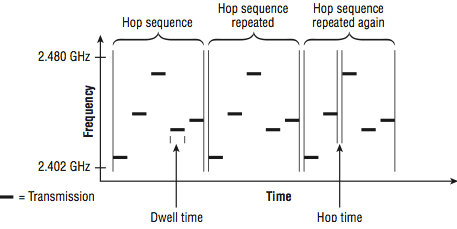 Some of the first Wi-Fi equipment I ever touched used FHSS. A little company based out of Akron, Ohio called Aironet manufactured both FHSS and DSSS APs and client radios that transmitted in the 2.4 GHz band. Figure 2 depicts some legacy Aironet FHSS equipment. In later years, Cisco would purchase Aironet and offer a line of autonomous APs and wireless PCMCIA client radios. 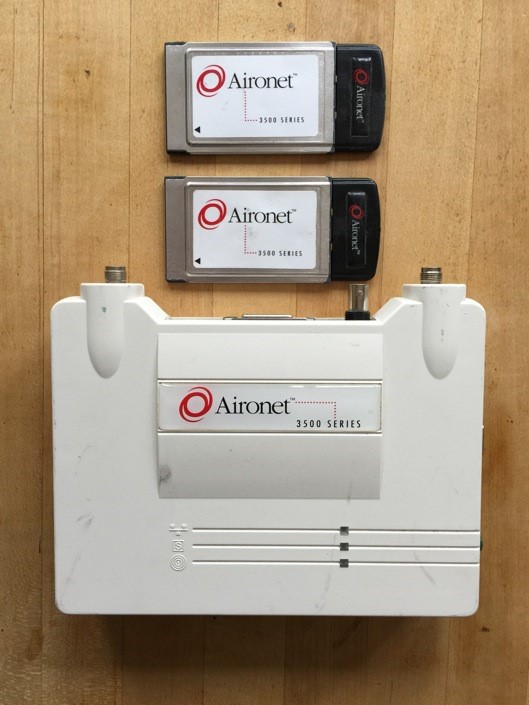 The FHSS radios had data rates of 1 or 2 Mbps. Look at Figure 3 and notice the 10Base2, 10Base5, and 10BaseT wired interfaces on the Aironet access point. Yes, there was a day when APs could be connected to the wired network via thinet, thicknet, or very slow Ethernet. 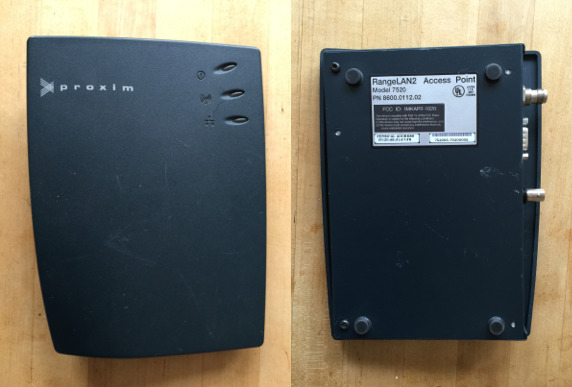 Future 802.11 amendments such as 802.11b and 802.11a would abandon frequency hopping for physical layer technologies that could support higher data rates. However, back in the day, FHSS was the cool Wi-Fi technology sporadically deployed in the enterprise. Frequency hopping never really caught on within the SoHo market, but does anyone remember HomeRF? SoHo vendors such as Linksys and Belkin offered 802.11b WLAN routers that used DSSS technology. However, vendors such as Proxim, Intel, and Motorola offered a competing wireless technology that utilized frequency hopping. The competing technology was called Shared Wireless Access Protocol (SWAP) or more commonly known as HomeRF. As shown in Figure 5, these home units used FHSS and had data rates of up to 10 Mbps. HomeRF never caught on, and 802.11 Wi-Fi won the battle for the home wireless networking market. 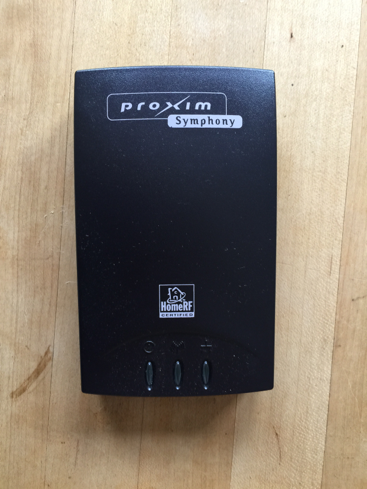 I hope you have enjoyed this little stroll down Wi-Fi memory lane. In celebration of this year’s World Wi-Fi Day on June 20th, I will share more Wi-Fi memories in a few more blogs.

Cloud Management at Your Pace with ExtremeCloud IQ Site Engine
Inflection Points Episode 9: How the World of Work is Expanding
Wi-Fi Nostalgia – Part 2 – Legacy Client Devices
The Dark Delta’s Impact on Cybersecurity – I Don’t Like Tigers and Snakes
Rocking Our Rainbows