The Day Our IT Department Encountered A Coronavirus Pandemic

March 19, 2020, California and ten other states declared a lock-down. Chaos ensued in the IT department. Unfortunately, for a writer who loves drama that’s not at all what happened at Extreme Networks. Even though the VP of Technology Solutions Jeff Creasy’s staff was immersed in the critical moments of Day Go, the final merging of all Aerohive IT systems into Extreme Networks, everything about the computing and networking environment continued to perform without hiccup.

Jeff, who describes himself as a life-long IT guy, has been with Extreme Networks for seven years and before that he spent 30 years with Nortel. His technology solutions staff is a globally dispersed virtual support team managing the day-to-day operations of the company’s data center, network, end-user functionals, and on-going service desk. They are situational-driven, with a constant flow of complex projects, like moving the corporate data center from California to Raleigh, NC. The steady stream of Extreme’s corporate acquisitions including Enterasys, Zebra, Brocade, and Aerohive has kept the team busy, but to make life exciting there was a major digital transformation project in the middle. Day Go, signifying the completion of an eight-month effort to fully integrate Aerohive’s directory services, email systems, file sharing, collaboration systems, and network systems into Extreme’s, was this week. 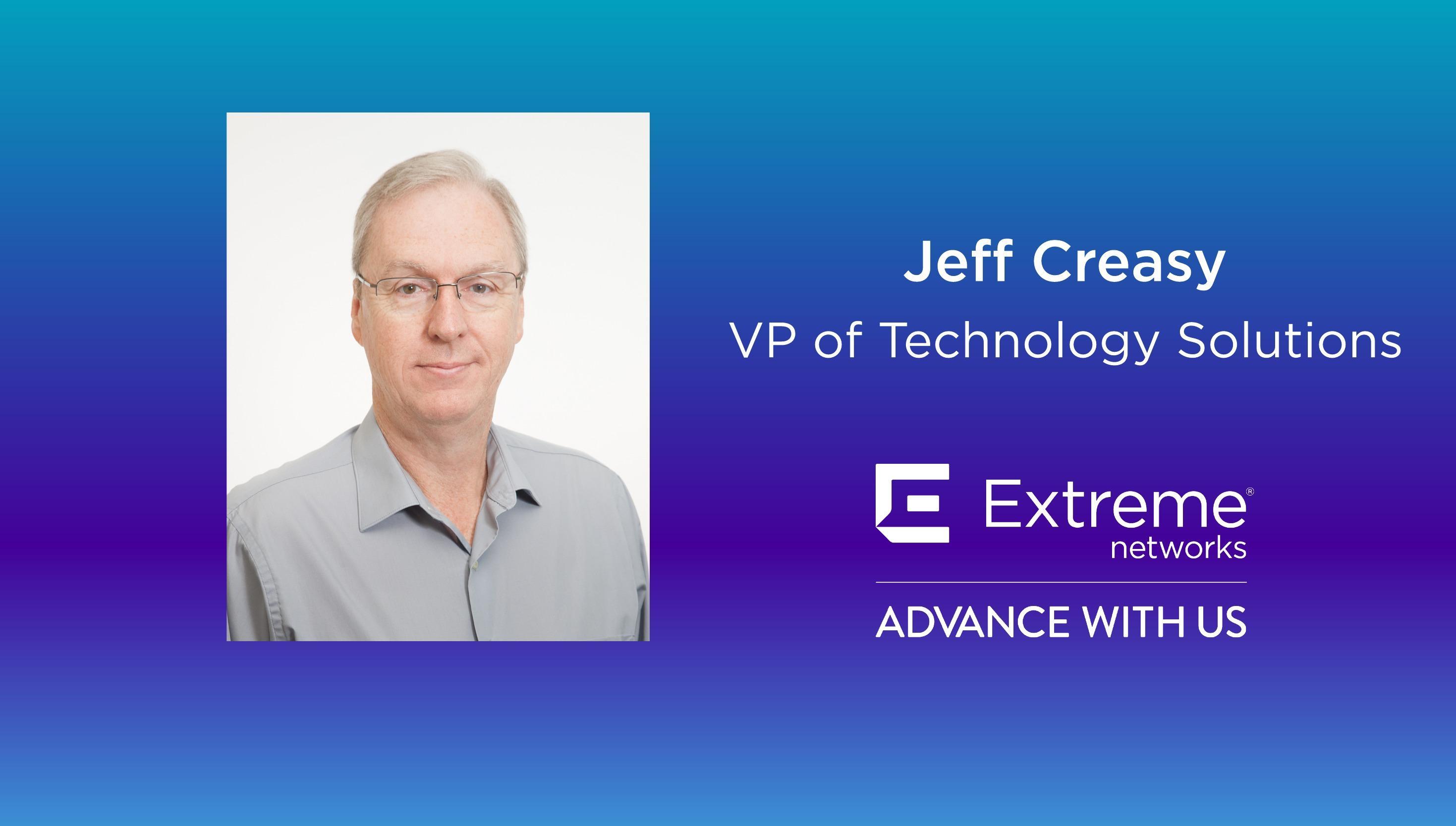 During Creasy’s tenure at Extreme there had never been any major network disruptions, despite hurricanes and flooding. To prepare for disasters, the company has a full back up data center in Salem, NH, for the primary data center in North Carolina. It helps that the cloud accounts for 75% of the computing environment with applications like Salesforce, Oracle, and Outlook365.

Creasy and his team began to anticipate the worst that COVID-19 could throw at them during February. How dramatic could it actually be? What if everyone suddenly had to work from home? They created a checklist. Do we have enough network capacity at corporate headquarters in San Jose? What about our VPN?

When they took inventory, everything looked in good shape. The network architecture could handle it. As a relatively flat geographically-dispersed company, most teams already worked in a collaborative environment. Support was safely spread-out worldwide. After minor adjustments to the firewalls, the overall network capacity should be more than sufficient.

“Our network is set up with a mesh mindset,” says Creasy. “If one VPN site experiences heavy traffic, the load shifts to another gateway. The back end intelligence and active load balancing tend to keep things operating smoothly. Everything is virtual, so we don’t have to constantly tweak it. During spikes that often accompany the quarter close, we stay ready in case we’re needed, but generally we are interrupt-driven and don’t have to stare at consoles to be sure the systems are running smoothly.”

When March 1st arrived, the team cautiously began more actively monitoring the environment and capacity usage. Then two weeks later came the decision: all employees would have to work from home.

The combination of the cultural, organizational design and the IT design kept it from being a sudden, dramatic crush. A cross-functional COVID response team had been established by the company and included HR, legal, communications, and IT. The focus was on providing employees as much information as possible on best practices for work-from-home. Even in the first weeks of working from home everything went smoothly. There was plenty of throughput and absolutely no need to meter user bandwidth. That’s not to say there were no challenges. The company has a large engineering facility in Chennai, India and employees there tend to favor desktop computers. With the shift to working from home there was now a need for lots of additional laptop computers for these employees. But due to COVID-19, laptop delivery times had now stretched out to eight weeks. Thankfully, Extreme’s network of reselling partners came through to solve this challenge. Similarly surprising, headsets became scarce. Creasy attributes this to the reality that the global workforce suddenly found themselves in a new work environment that many were not prepared for.

Another challenge was the second-order effect. Creasy’s team, in the middle of the Go Live project to integrate Aerohive IT, had enlisted several third parties, like TCS, to help with the effort. But now those companies were also directing their employees to work from home. Extreme would have to ensure that their systems in new locations were still 100% secure, a project that Extreme’s CISO Phil Swain helped out with.

One additional major project was in the preparatory stages as the pandemic hit. The Aerohive acquisition had provided the impetus to completely cloudify all networks across every site. The plan called for a “big bang” — converting every site over a single 24-hour period on March 16. Due to the pandemic, the decision was made on March 15th to postpone cloudification until people could be back on site, hopefully in May.

Would Creasy and his team have done anything differently having now experienced their first pandemic? Probably not on the IT side, other than pre-stocking laptops and headsets. On the human side, they might encourage more focus on teleworking challenges and best practices, up to and including instituting a formal program. The technology makes things easier, but there’s always a human side to it.

As each new year approaches, Creasy starts out thinking maybe this will be a year to catch some breath and implement the IT refinements that have been begging for deployment. New automation projects to further simplify the environment. Continue to ease IT out of the support loop as much as possible with better self-help and autoconfiguration. Implementing cost effective solutions with equal or better capability. Other priorities intervened this year, but next year looks good… barring something worse than a pandemic.

Jeff Creasy’s Guide for Designing Your IT Network To Survive A Pandemic, As Practiced By Extreme Networks

What Was It Like to Design the Network for the World’s Largest Outdoor Festival? Patrick Reflects on One of His Favorite Career Achievements
See the Network, Protect the Network
Multicloud: The Top Conversation Driver!
Keeping Your Head in the Cloud and Your Feet on the Ground – An Interview with Extreme Champion Trygve Wettestad
Cloud Managed Technologies Have Never Been More Critical