For many sports fans, there are few things that rival the thrill of attending a live NFL game.  From the pre-game festivities, to the intense action on the field, to the emotional reactions of the crowd, it’s an experience that is unlike any other.  And while the in-stadium experience for NFL fans is unforgettable in and of itself, teams are still investing in strategic technologies to deliver more value and convenience than ever before – both inside the stadium and beyond.

The Seahawks are a compelling example of a team that uses technology to augment the fan experience.  Located in Seattle, Washington, CenturyLink Field is the Seahawks’ home stadium, and is already considered one of the most exhilarating places to attend a live NFL game – if not a live game in general – and one of the most intimidating destinations for visiting teams.  However, the team still considered various ways to enhance the game day experience for fans.  Technology was one way to do that. 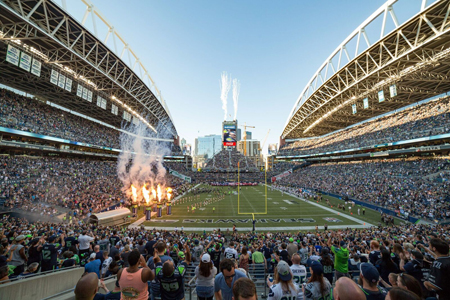 The Seahawks invested in and deployed a high-density Wi-Fi solution prior to the ’14-’15 NFL season, led by the team’s VP of Technology, Chip Suttles.  The team recognized the demand for connectivity among their fan base, who, despite being known as one of the most passionate, loudest crowds in the NFL, still desired the ability to use their mobile devices to their full extent during games.  The increased capabilities of smart phones and their applications required a purpose-built Wi-Fi solution to support the bandwidth demands of 68,000 fans in one stadium.

What resulted was a pervasive, purpose-built network for CenturyLink Field, delivering connectivity to Seahawks fans in addition to supporting the back-of-house operations required for a smoothly-run event.  At the time of the investment the Seahawks were relatively early adopters of the technology.  Their decision is clearly validated, as now most NFL teams have some form of fan-facing Wi-Fi.  Not to mention, this past season the team saw an average of over 35K users access the Wi-Fi network and 28K fans actively using the network simultaneously at each home game.  For more insights from the Seahawks Wi-Fi usage during the ’17-’18 season check out this on-demand panel discussion.

The Wi-Fi network satisfied fans’ need to ‘stay connected’ on game day, but it also gave the Seahawks a powerful vehicle to deliver more value to their fans in-stadium.  For example, in addition to improving access to social media, internet, and streaming videos, in-stadium Wi-Fi lent more support of the Seahawks Team App for fans, which is managed by Seahawks Director of Digital & Emerging Media, Kenton Olson.  The app offers a litany of team-related content and updates for Seahawk fans across the world, as well as a number of benefits for fans on game day, like TicketMaster integration to access mobile tickets, a labeled map of the stadium with navigation capabilities, on-demand video replays, real-time stats, and much more.  The Seahawks also have integrated Wi-Fi analytics, so the team can determine the number of fans using the app in-stadium and measure the quality of their experience. 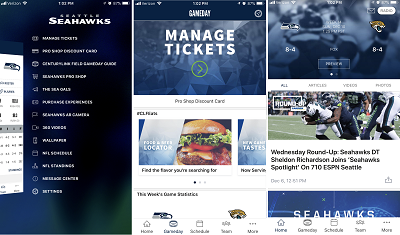 The Seahawks’ Team App has an array of team-specific content for fans across the world, and helpful tools for fans in-stadium on game day

The Seahawks are also piloting technologies to proactively engage with their fans in more meaningful and personalized ways, specifically the use of BLE (or Bluetooth low energy) beacons.  Similar to a Wi-Fi solution, BLE beacons have a hardware and software component: at the hardware level, beacons are BLE devices that broadcast data to nearby electronic devices, usually in very close proximities.  At the software level, beacons are used to transmit messages that are then detected and processed by ‘receiver devices,’ like a mobile app on a smart phone.

For Suttles and Olson, since many of the beacon providers use similar hardware, their selection was based off of the beacon’s software components, which includes a robust content management system, easily configurable portal, and a cloud-based construction model that allows Seahawk partners to also leverage the solution for joint marketing campaigns.

The Seahawks deployed about 200 BLE beacons around CenturyLink Field several seasons ago – at every exit and entry point, across the concourses, at key team attractions, and next to each concession stand and Seahawks Pro Shop.  Only fans who have the official Seahawks Team App can be sent messages and promotions from the BLE beacons, and typically these messages are sent after fans dwell or linger in a given area for an allotted amount of time.

Maintaining their ‘surprise and delight’ approach to the fan experience, to-date the Seahawks have primarily used the beaconing technology to deliver location-based, contextual notifications to fans related to interesting attractions in-stadium.  For example, the team placed a beacon at the North Plaza area of the stadium where there are roman numerals ’48.’ They were originally placed in Times Square in New York City for Super Bowl 48, which the Seahawks won.  Fans who dwell near the attraction (and beacon) for two minutes are sent a message to spread awareness about the landmark as well as an option to “Relive Super Bowl 48” with key moments, top video replays, and images.  There are a number of similar instances like this throughout the stadium.  The team feels this approach to fan engagement is the most effective, as opposed to promotions that attempt to sell an extra hotdog or a discounted piece of merchandise – although that’s certainly a way to use beacon technology should another team desire to do so.

As mentioned above, the cloud-based campaign manager that enables the beaconing hardware allows Olson and his digital marketing team the flexibility to partner with other businesses to develop and rollout unique marketing programs.

A great example of this was a campaign the team ran during the ’14 NFL playoffs with Starbucks, another well-known brand with a significant presence in the Seattle area.  The two teams identified 50 locations in the market where they placed beacons at Starbucks stores.  Throughout the course of the playoffs, every time a guest entered a Starbucks with the Seahawks Team app they would be sent a unique piece of Seahawks content – video, photo, article. After a certain number of visits in an allotted amount of time the fan would be gifted a $20 gift card for their loyalty and business.  Seeing significant engagement, the campaign was a massive success for both organizations, and customers loved the personalized outreaches they received from two brands they’re heavily connected with. 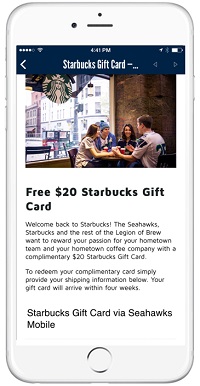 The Seahawks teamed up with Starbucks, another local, well-known brand, to run a unique joint campaign during the NFL playoffs a select Starbucks locations

In another use case the Seahawks teamed up with partner American Express, who leveraged the team’s in-stadium beacon infrastructure and campaign management software to send unique messages to fans in-stadium to promote an ongoing program for American Express customers, another very successful fan engagement campaign that brought two brands together.

Conclusions and Next Steps

It’s clear that Suttles, Olson, and the entire Seahawks team have a specific vision when it comes to the fan experience, and are successfully executing on this vision of ‘surprising and delighting’ their fan base with in-demand services and unexpected promotions.  Moving forward, the Seahawks will continue to leverage strategic technologies like high-density Wi-Fi, Wi-Fi analytics, and BLE beacons while also exploring other emerging technologies that may become available.  One thing’s for certain, whatever the future holds, Seahawks fans can continue to expect an enhanced and personalized experience provided by their team.