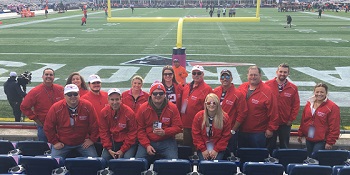 The Patriots loss to the Panthers on October 1st was hard for fans to swallow, but the Wi-Fi wasn’t. Since Gillette Stadium is equipped with free Wi-Fi for fans to use, over 30,000 were connected reliably to the network. Fans were also able to use the Gillette Stadium Application to make purchases, search stadium amenities, enter game day giveaways and contests, connect to social media, create their own photo keepsake with Photo Fun, and much more!

For fans unaware of the free stadium Wi-Fi and the Gillette Stadium App, Extreme Networks Wi-Fi Coaches™ were roaming the stadium educating them on the amenities, features, and benefits. Gillette Stadium, the New England Patriots home field, was actually the first stadium to pioneer the Extreme Networks Wi-Fi Coach™ Program. The Patriots’ and Extreme’s relationship stems back 2012, when the Patriots chose Extreme to be their wireless provider and deliver the best possible experience for their fans.

Wi-Fi Coaches at Gillette Stadium wear red jackets that say Extreme Networks Wi-Fi Coach on the back and they’ve been at every home game for the last six seasons. The Patriots have integrated the Gillette Stadium App so that if a fan is experiencing an issue with the network they can alert the Wi-Fi Coaches to their seat number and a Wi-Fi Coach will come by to answer the question they have and solve the issue.

What’s your favorite part of being a Wi-Fi Coach?

Interacting with fans and truly enhancing their game day experience. As we know, technology plays such an integral role in the vast majority of day to day lives. Being able to help fans to not only connect, but stay connected and embrace the full experience available to them through the network and Gillette Stadium App is something I truly enjoy. I love being at the stadium and feeling the energy and excitement. There’s something very special about being at the stadium and being a part of game day, being a part of the action.

What are fans reactions to your presence at games?

Fans are excited to see the Wi-Fi Coaches! We’ve recently had a number of fans tell us that seeing us at the games reminds them to connect to the Wi-Fi!

Their reactions after you’ve solved their issue?

Happy! Fans at Gillette Stadium can report an issue through the Gillette Stadium App. These issues are then sent directly to our team of Wi-Fi Coaches and we address them in real-time. Fans love that someone on the other side is actually listening!

Has there been a learning curve from season to season due to upgrades at the stadium?

What’s your most commonly asked questions at games?

“Is the Wi-Fi free? Is there a password?” The Wi-Fi Coaches take this opportunity to help fans connect to the Wi-Fi Network and educate fans on the features of the Gillette Stadium App so that they can embrace the full game day experience.

Any advice for fans attending Patriots games at home?

Connect to the free Wi-Fi and check out the Gillette Stadium App! There are a lot of cool, unique features in the app that come to life in the stadium!

Have you attended a Superbowl as a Wi-Fi Coach?

Yes, I was fortunate enough to attend Super Bowl XLIX as a Wi-Fi Coach and Super Bowl LI as the Wi-Fi Coach Operations Manager leading the team of top-notch coaches from Wi-Fi Coach programs throughout the country. Two experiences I am forever grateful for and will absolutely never forget!

To learn more about the Extreme Networks Wi-Fi Coaches Program, read the Wi-Fi Coaches Enhance Fans’ Game Day Experience blog and look out for more upcoming blogs taking you behind the scenes with individual Wi-Fi Coaches and stadiums from around the league.

How MLB Scored Another Homerun With Extreme’s Cloud Infrastructure
Cornstalks, Curveballs, and Connections
The Stadium Network: A Microcosm of the World
Extreme Networks Heads to The Mile-High City for MLB All-Star Week
Inflection Points Episode 6: The Rapid Evolution of Esports