After an entire season of anticipation, preparation, and build up Super Bowl LI is in the books.  It was certainly worth the wait, and Football analysts continue to break down the key players, moments, and stats that led to the New England Patriots’ historic win over the Atlanta Falcons.

As the Official Wi-Fi and Wi-Fi Analytics Provider of Super Bowl LI, the Extreme Networks team is conducting a post-game recap of our own, by reviewing how connected and how engaged the Super Bowl LI experience was for visiting fans.

For those not familiar with the Super Bowl experience, while the game is unquestionably the center point there is also an array of events and activities leading up to and surrounding the game itself.  As far as the NFL and Super Bowl goes, Extreme is known for the delivery of high-density Wi-Fi solutions in-stadium, but this isn’t the only aspect of the Super Bowl where we were involved. 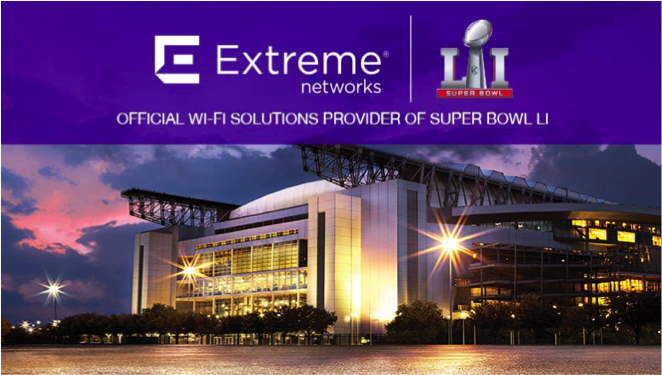 First and foremost, Extreme Networks is the Official Wi-Fi and Wi-Fi Analytics Provider of Super Bowl LI.  What exactly does this mean?  It means that Extreme helped design and deploy the high-density Wi-Fi network at NRG Stadium in Houston.  Nearly our entire product portfolio is installed and operational in the stadium, including: ExtremeWireless, ExtremeSwitching, ExtremeManagement, ExtremeControl, and ExtremeAnalytics.  Not only does our infrastructure enable a secure and reliable mobile experience for connected fans in-venue, it also supports the critical functioning assets of the business and the facility.  To make this network a reality, over 1,200 APs were installed throughout the stadium, as well as over 100 Extreme switches.

To understand how this system was built and why it was important, check out our Birth of a Network video below.

Specific to Wi-Fi analytics, ExtremeAnalytics measures network and application performance, as well as the mobile engagement patterns of connected users.  As much as it is critical to blanket an NFL stadium with Wi-Fi to deliver a quality mobile experience for its guests, it’s equally important to understand how this service is being used – and what that experience looks like.  As it relates to Super Bowl LI, it’s clear that the Wi-Fi experience was an excellent one for fans in-stadium: a new Super Bowl Wi-Fi record was set for data transferred across the network at 11.8 TBs! Not to mention at the peak, over 27,000 concurrent users were on the Wi-Fi network. For learn more about this record-setting performance, check out our Super Bowl LI Infographic!

Super Bowl Live at Discovery Green & The House of Blues

Over 108,000 unique user connections, with over 8.8TB of data transferred! [combined]

One of the more engaging elements that was rolled out at Super Bowl LI was Discovery Green.  Located in downtown Houston nearby Super Bowl Stadium, Discovery Green was a nine day, free festival that featured live music, performances, and interactive exhibits.  Guess what else? Extreme Networks Wi-Fi! 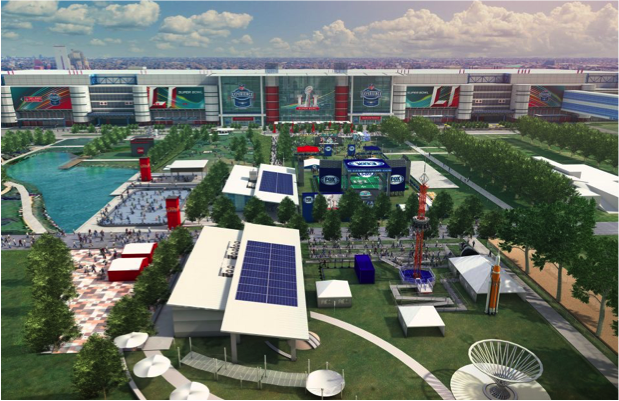 In one of its first live rollouts, the Extreme team set up a temporary, outdoor Wi-Fi system for those enjoying the Super Bowl festivities within Discovery Green.  The system leveraged ExtremeCloud for Wi-Fi service delivery.  Essentially, customized pods that each contained 2-4 802.11ac Wave 2 APs were strategically placed around the area; 156 Wave 2 APs were utilized in total, and a centralized command center was setup to monitor the network performance and network traffic.  During the 9 days the temporary system was live, over 100,000 unique users were documented, and 8.5TB of total data was transferred across the network!

In a similar model, we leveraged ExtremeCloud for Wi-Fi service delivery at the Houston House of Blues, where the “NFL House” was hosted, an exclusive hospitality venue that features three nights of events leading up to the Big Game.  Installing 27 indoor .11ac APs, Extreme delivered secure, high-quality Wi-Fi connectivity for those enjoying the events at the House of Blues. 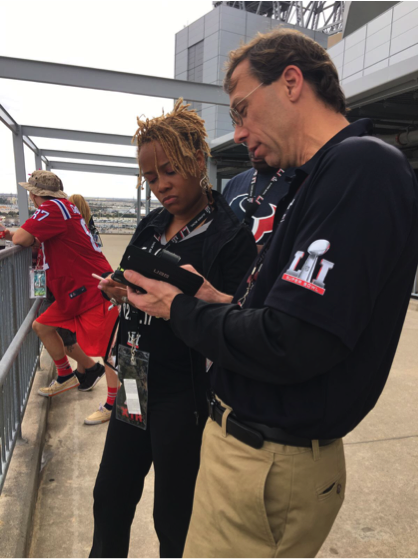 Not only were Extreme’s purpose-built technologies deployed onsite, an entire team of Extreme experts were onsite as well, including a team of trained Wi-Fi Coaches in Super Bowl Stadium.  Extreme’s patented Wi-Fi Coach Program is currently running in a number NFL stadiums with the purpose of ensuring a quality mobile experience for fans on game day.  The Wi-Fi Coach Team in Houston was comprised of a select group of Wi-Fi Coaches from all of Extreme’s partner clubs, consider them the ‘All-Star’ Team of Wi-Fi Coaches.

“Having the best Wi-Fi Coaches from around the league assembled into an all-star team allowed us to not only provide first class support the Super Bowl fans, but also detect, report and correct sources of Wi-Fi interference impacting game day experiences.”

From helping fans access the Wi-Fi network, to supporting troubleshooting exercises, to monitoring social media for comments and questions, the Wi-Fi Coach Team delivers a personable touch point with fans in and around the stadium, and by communicating continuously with the central Network Command Center in-stadium, the team also helps identify and resolve any potential network interferences negatively impacting the experience for connected fans.

What a week it was, and when referring to the numbers it clearly supports a quality mobile experience for onsite users.  The total engagement metrics from NRG Stadium, Super Bowl Live at Discovery Green, and the NFL House at Houston House of Blues indicate in total over 143,000 unique users connected to ExtremeWireless, generating over 20TB of data between the three locations!  That’s an unbelievable amount of users and data, and it further validates the need to provide secure, reliable Wi-Fi connectivity in any setting – regardless of the inherent challenges the environment or the business present.  It’s also clear that Extreme Networks can deliver, even in the most challenging and high-profile settings.

If you want to learn more about Wi-Fi at Super Bowl LI, and how it set the new standard for connectivity and fan engagement, register for our post-Super Bowl recap webinar here!

How the NFL and Extreme Networks Advance the Fan Experience
How MLB Scored Another Homerun With Extreme’s Cloud Infrastructure
Cornstalks, Curveballs, and Connections
The Stadium Network: A Microcosm of the World
Extreme Networks Heads to The Mile-High City for MLB All-Star Week