At ISTE 19, Dr. Carmen Coleman, the chief academic officer at Jefferson County Public Schools in Kentucky, explains how JSPS implemented an innovative backpack for success skills using Google tools and Extreme Networks infrastructure. The backpack is a digital platform for students to enter pictures, video, and a written reflection of what they have learned in five key areas—emerging innovator, productive collaborator, effective communicator, globally and culturally competent citizen, and prepared and resilient learner.

The Jefferson County Public Schools that Dr. Carmen Coleman was asked to help in 2017 faced difficult challenges. Several of the schools in the district were the lowest performing in the state, and students had low expectations.  With over 100,000 students, the district ranks among the 30 largest in the country; and one of the most diverse in the state with large achievement gaps. Since none of the previous attempts at improvement had succeeded, Acting Superintendent Marty Pollio wanted Coleman to take a different, deeper approach involving project-based learning. 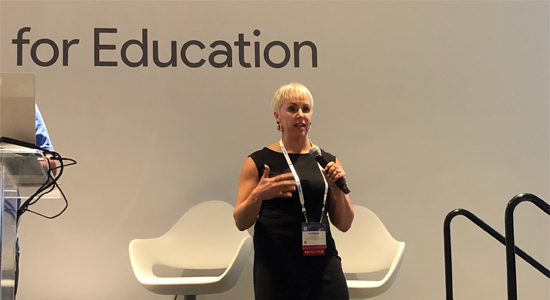 As the acting chief academic officer, Coleman put a plan in motion that began with an analysis of the desired end game. Her team sketched out the profile of the ideal, well-rounded graduate. What skills would they need to possess and what kinds of experiences should they acquire to get there? From that, they determined what should go into the students’ Backpack of Success Skills. The backpacks were instantiated as color-coded folders based on desired skills and outcomes and stored in the district’s Google Classroom system. Students are also able to store artifacts that align with folder skills.

The designers of the backpack began with a survey to determine the set of skills that teachers and staff felt should be included. The list started out lengthy but was ultimately trimmed back to five major categories. 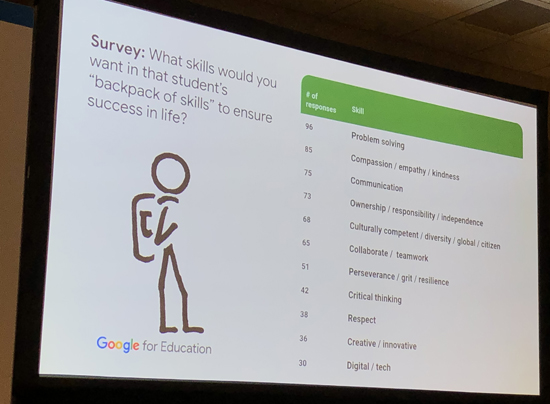 When asked, “What skills would you want in the student’s backpack of skills to ensure success in life”, the answers covered a broad territory. 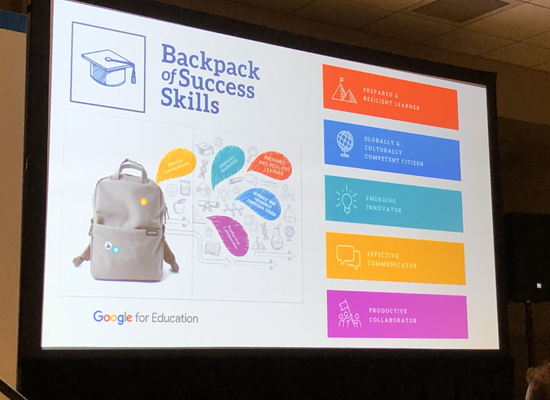 These are the five major categories that Carmen and the project team culled the list down to.

JCPS uses Extreme Networks Wi-Fi and wireless switches throughout the district and implements network policy with Extreme Management Center, which makes it easy to ensure students get access to the resources they need, while still protecting student safety and privacy. With Extreme Analytics, the district can track how and where the backpack resources are used and will be able to correlate the student actions with student achievement and performance.

Because of the needs of the district, the backpack team decided to skip a pilot and implement the program swiftly across all 168 schools. Superintendent Marty Pollio says this will be a dramatic change for the district. “Our students, teachers, and families will see a transformation in our classrooms with our new Backpack of Success Skills. For the first time, students districtwide will fill their virtual backpacks with examples of their work and defend that work during the school year.”

Here is Dr. Coleman describing the JCPS Backpack for Success.

Teachers Don’t Have to Be Techies—Here’s Why
Giving Students a Smart Start on Their Professional Journeys
ExtremeCloud IQ CoPilot and Other AIOps Software Ruled E-rate Eligible as MIBS
Why Isn’t School More Fun?
Change When You Want with the Right Network for your K-12 School