As a Caterpillar Transforms, So Can Your Ethernet Switch Flexible, Simple to Use Networking that Adapts to Your Business Needs

The butterfly is one of nature’s most amazing creations. Its ability to transform from an ordinary caterpillar into a fully winged creature is spectacular and an incredible persona change.  Now imagine if your network hardware could undergo a similar transformation—changing its persona on demand.  Your hardware could take on different personalities, be re-purposed on demand and flexibly adapt to your varying business needs.  And if your hardware could change not only from caterpillar into a butterfly, but back again into a caterpillar, it would be truly transformative.  This is what Extreme is making possible with its new universal hardware platforms.

Now why isn’t this flexibility built into all network hardware today?  It’s because networking vendors, Extreme included, have traditionally locked their features to the underlying hardware.  Each wired/wireless hardware family has its own “fixed” operating system (OS) and related features — all tied to the hardware. This enables vendors to offer a wide variety of features across their different hardware families – which is great.  But it also means that each hardware family is limited to a specific set of features and use cases.  And this is true for the lifetime of that hardware family.  If requirements change and that hardware no longer fits the original business need, you need to “rip and replace” and upgrade to new hardware family.

But what if the link between the hardware and the operating system was unlocked?  This is what Extreme is doing with its “universal platforms” for switching and wireless access point (AP) products.  We’re allowing a single hardware family (e.g., a switch or access point) to run more than one operating system.  When you deploy the hardware, you select the OS “persona” and the associated features you want to run on that hardware.  You can not only select the OS persona when the hardware is first deployed, but you can re-select (or change) it throughout the lifecycle of that switch or AP.  This a fundamental change in the way that most network hardware is sold and deployed today.

For example, Extreme’s 5520 Series Universal Switches, can run either the ExtremeXOS or VOSS operating system.  When running ExtremeXOS, the 5520 delivers a wide set of advanced edge services, including stacking, advanced policy, multi-media streaming and extended edge switching, among many others.  When running VOSS, the 5520 runs full Fabric Connect services allowing you to extend all its benefits to the edge, including secure segmentation, automated network operations and simplified provisioning.  Either persona (or OS) and its related features can be selected and run on the identical 5520 hardware.  And the persona can be changed at any time, allowing the 5520 hardware to re-purposed from one use case to another – extending the value of the hardware and providing tremendous business flexibility.

OS/persona selection and onboarding for Universal Hardware is simple and can be done entirely from the cloud. Using ExtremeCloud IQ, this set-up process is also automated. This means, for example, that when you ship 5520 switch to a location to be installed and connect it to your local network, the switch automatically connects to ExtremeCloud IQ.  Once connected, ExtremeCloud IQ can bring up a pre-selected OS (persona) and configure it on the switch.  No longer do you need to send a network engineer on-site to console into the switch for initial set-up.  Persona selection and set-up can now be done remotely and automatically. 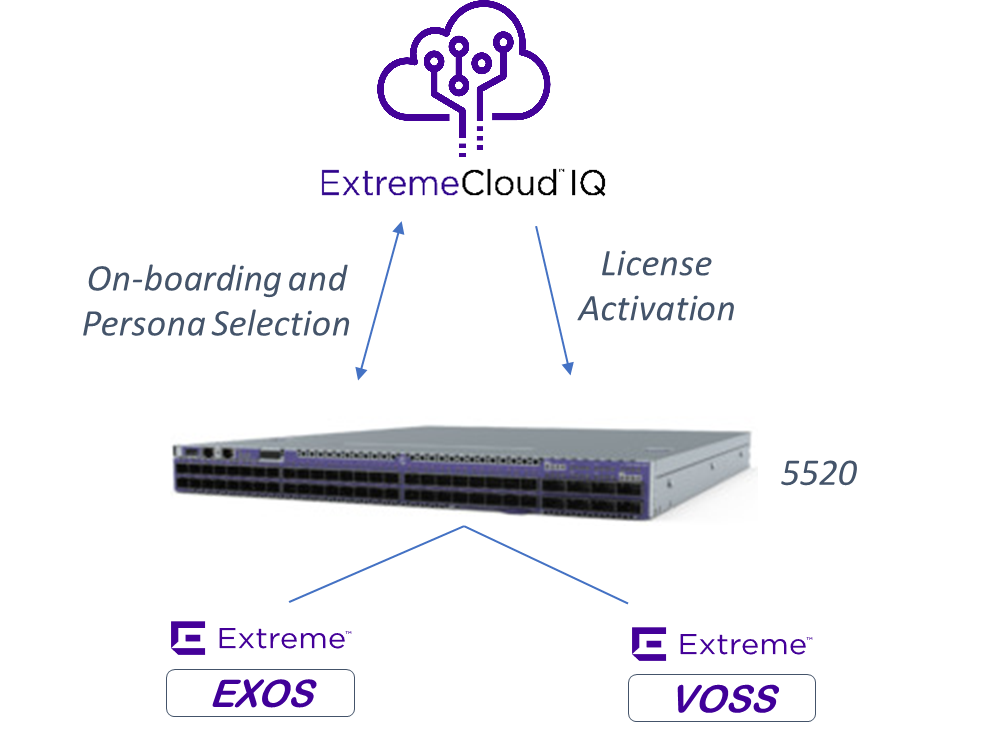 Similarly, software license management – a process no one enjoys handling – can also be simply done from the cloud.  For example, software licenses for the 5520 can be installed and activated from ExtremeCloud IQ.  No need to manually assign license keys to each 5520 switch.   And this process can be done in bulk because device licenses are pooled and can be applied to multiple 5520 switches at once.  This simplicity even extends to license transfer.  Device licenses can be moved from 5520 to another – with just a few clicks – all from the cloud.

Now, I hope this has given you a taste of what’s possible with ExtremeCloud IQ and our Extreme’s Universal Hardware platforms.  They are a transformative family of wired and wireless products that flexibly address a wide range of business requirements.  To learn more about these products, and how they can provide you a more Effortless Networking Experience, check out this short video below.