A Virtual Revolution in Education 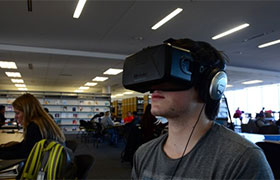 As Julie strolls through her virtual classroom space she has forgotten for the moment that the room her students occupy is simply a vacant shell. Seats and cubbies line the wall, but the room is empty except for the students. Nonetheless, one group of students is touring the Coliseum in Rome, another is visiting the Louvre in Paris. In the corner, a third group is participating in a dissection of Timurlengia euotica, a dinosaur of the Jurassic period. The fourth group is tackling advanced mathematical concepts dealing with time-varying three-dimensional solids. The objects and environment that the students and teacher are seeing and interacting with are visible by means of virtual or mixed reality presented through head-mounted displays.

Virtual reality is fundamentally changing education. The exponentially-increasing power of computing, graphics display, audio processing, and tactile feedback have combined with wearable computing and the Internet of Things to create virtual environments so real the experience has been described as, “squeal-demanding, face-melting, mind-bending, and soul-rending.” The technology now bears no resemblance to early precursors like Nintendo Virtual Boy or Sega VR. Though the term virtual reality is most common, the version best suited to the classroom is mixed or augmented reality, which combines computer-generated objects with the real world. This enables students to see their hands touching virtual 3D objects. They also see the teacher and other students as they interact in the mixed reality world.

The survey takes only 2-3 minutes to complete. Your responses are important whether or not you have personal experience with virtual reality. Ten Google Cardboards will be awarded. Take the survey now.

Educators are already bringing VR into the classroom

K-12 educators are finding new and diverse ways to improve teaching and learning with VR. From the beginning, Google has targeted their Google Cardboard, a very low cost (from $15) means of using existing smartphones for immersive VR, especially for K-12 educators. The free Expeditions Pioneer Program provides guided tours for up to 50 students at a time to places like Buckingham Palace, Machu Picchu and the Great Barrier Reef. Teachers at Hartshorn School in New Jersey take their students on tours of coral reefs and landscapes in places like Greece and Egypt.

Virtual reality will have a growing role in helping to teach disabled students, children with learning disabilities, and students unable to attend school. Penn State engineering school has developed a virtual reality system that provides an immersive classroom experience to distance learning students.

“So the Oculus Rift is fantastic. If you’ve used it in its original incarnation, you know that it’s incredible. It’s virtual reality done better than you’ve ever seen it before. It’s revolutionary. And it’s nothing compared to what’s coming next. I mean Oh. My. God.” – From I Wore the New Oculus Rift and I Never Want to Look at Real Life Again

Colleges have begun offering courses specifically in VR design. The University of Maryland, College Park, launched a class on virtual reality that gives students the opportunity to design their own interactive world, work with 3D audio and experiment with immersive technology through a combination of hands-on learning and case studies. The University of Georgia offers similar classes in which students design and explore applications for VR. Conrad Tucker, an assistant professor of engineering at Pennsylvania State University, has received funding to build a virtual engineering lab where students hold, rotate, and fit together virtual parts as they would with their real hands.

The concept of virtual reality received worldwide attention when Facebook announced their purchase of Oculus for $2B. Previous to that, Oculus had raised $2.4M on Kickstarter. But now VR was ready. That was two years ago. The Oculus Rift consumer versions have been shipping since March, but demand is so high that new orders have about a six week lead time.

Samsung’s Gear VR is a step up from Google Cardboard, but is priced at $100 and is specifically designed to hold Samsung’s Galaxy S6, S7, and Note5. It runs Oculus software.

Microsoft has begun shipping their Hololens augmented or mixed reality headset to software developers. The system blends holographic content into the physical world. The developer headsets are priced at $3,000, but they have not yet announced the consumer version pricing or when it will ship. Guesses at final pricing range from $500-$1500.

Meta Company is selling developer kits of their Meta 2 augmented reality system for $949. Like Hololens, it adds 3D content to the real world as seen through the headset. No consumer release date has been yet announced.

Magic Leap is probably generating the most anticipation of any high tech launches in recent history. The company is valued at $4.5 billion as of their last round of financing with major investments by Google, Alibaba, and Qualcomm. Their company uses the term mixed reality to describe their product’s ability to mix computer-generated 3D images with the real world. The company claims it creates the mixed reality images by projecting virtual elements from a light source at the edge of the glass, which are then reflected into the user’s eyes by beam-splitting nano-ridges.

Additional noteworthy systems include Vive from the team of HTC and Valve, priced at $799 and shipping within three days of ordering; and Sony Playstation VR, slated to debut in October at the price of $499.99.

In addition to revolutionizing education, will VR make us happier?

Where will virtual reality lead? The positive, and hopefully most realistic view is that it will only improve our education system and enrich our lives. As ever-more possibilities for VR are thought up, each will be evaluated as either enhancing or detracting from our life experience and either included or discarded as appropriate. One fear is that advertising and commercialism could further invade our daily lives. This won’t happen as long as such intrusions are kept as opt-in only. This Hyper-Reality video by Keiichi Matsuda gives a dystopian view of what could happen by unchecked intrusion into a virtual reality future.