5G Beyond the Hype Part 4: A Bundle of Models

I’ve got a confession. For several years of my career, I was surrounded by Citizens Broadband Radio Service (CBRS) business and technology conversations, but I just COULD NOT (yes, bold, underline, and italic emphasis!) figure out why in the world it really mattered. At all. To anyone. I would listen to each presentation and scratch my head. Join a session at a conference and walk away more confused and frustrated than before. I trudged through the acronym mud: GAA and PAL this; LAA and LWA that; LTE-U and MulteFire and SAS and HAAT. But why do I care???

It drove me nuts. I eventually (slowly) realized that I was asking the wrong questions, and they were giving the wrong answers. We put technology ahead of business. A lot of us technologists do this. It’s embarrassing to admit because it’s so obvious. Simply put, the technology doesn’t matter if the business and implementation model isn’t suitable and the benefits aren’t clear.

In my experience with private cellular, the business model is usually the first hang-up. And I think it happens because of a kind of technology consumerization. Usually, consumerization means we are bringing our consumer technology experience to bear on enterprise computing. However, in the case of private cellular, we are trying to fit our consumer buying model into the enterprise.

Here’s what I mean. Every time someone says “cellular,” we picture 3 basic things: a mobile phone, a cellular radio/antenna/tower, and a monthly subscription to a provider. So when we hear “cellular for enterprise,” we must resist that first image (see Figure 1) in our minds: carpeted enterprises full of people in their cubes, typing on laptops that are connected to their cloud apps via cellular signals coming in through the windows—instead of Wi-Fi coming from the ceiling.

I know this picture is not just mine because I hear its influence in a couple of common 5G viewpoints.

The first is an anti-cellular argument like this: “Enterprises will never want to pay for a monthly cellular plan for all of their devices.”  This very clearly originates from our consumer cellular mentality, and we transfer it to the enterprise. The enterprise cellular buying model is likely a bit different, especially when enterprises own/operate the network privately (instead of leasing a slice). I believe enterprise ownership will be the most common model of private cellular.

The second is the delusional 5G vs. Wi-Fi, or 5G will kill Wi-Fi storyline. At its heart, this position assumes that since unlimited data plans are ubiquitous, 5G is better than 4G, apps are in the cloud now (or perhaps more delusional, in the telco edge), and telcos said so, why should anyone need Wi-Fi anymore. It’s quite a naïve view of the connectivity landscape, especially as it relates to motivating factors (like cost) that drive technology adoption and use.

The third is network slicing. If you’re not familiar, slicing is a way for operators to sell a virtual layer (i.e. slice) of the public cellular network to enterprises so that businesses don’t have to buy, install, or operate their own network. It builds on the assumption that enterprises want to buy mobile services in the same way consumers do. In other words, reuse the same infrastructure, lose control and visibility (consumers never needed it), and basically only use the network as a path to the Internet. On its face, slicing seems like a ham-handed approach that forcibly fits enterprises (a new customer!) based on operator leverage points (spectrum licenses and existing infrastructure). I’ll elaborate on this later and maybe hedge a bit.

There’s plenty of room to debate the merits of 5G vs. Wi-Fi as well as slicing, so I won’t pretend that my single paragraph treatment is satisfying. Nonetheless, I think they are frequent misconceptions that often attempt to apply the cellular-model-that-exists-today with the cellular-that-might-succeed-tomorrow. The two are not one.

So What is the Enterprise Problem?

Before we talk about the actual models, let’s identify the problems that enterprises are typically trying to solve with cellular networks, because the problem steers the solution. There are many discrete problems, which may or may not co-exist:

There’s also a broad category of business use cellular that is not addressed under the banner of private cellular. For years, companies have been using mobile plans for employee phones, voice systems, fleet monitoring, outdoor cellular gateways for non-wireless devices (industrial, wired-only, legacy), and much more. You could call this private cellular, I suppose, but it’s basically just a commercial macro cellular subscription for a set of uses solved by 3G and 4G. So, let’s just put that aside for now.

There are several private cellular models that target these enterprise problems.

Let’s start with the most common private cellular option, Distributed Antenna Systems (DAS). A DAS is a way to distribute cellular radio signals throughout an indoor facility to solve for indoor cellular coverage. As shown in Figure 2, a DAS takes a cellular source signal (commonly from an antenna on the building roof) and redistributes it throughout a building for indoor connectivity. Traditionally, a DAS uses RF cabling (coax) to carry the RF signal throughout a building, with antennas along the path for transmission.

A DAS can support multiple operators, but requires integration work (and equipment) with each operator. The DAS integrates with and depends on the carrier backend, which means the entire system is independent from the campus IP network. This also means the enterprise—though they may own the RF distribution hardware—lacks full control over user experience, connection policy, or usage data. If the operator makes spectrum changes and doesn’t bother giving the enterprise a heads-up (yes, this happens), it may affect enterprise devices that rely on it.

But in the end, DAS solves the key business problem: indoor cellular coverage. This pain point could revolve around guest and employee satisfaction, emergency voice capabilities, or other business-critical voice or messaging systems.

If you’re interested in more DAS models and details, this is a good primer: https://www.waveform.com/pages/das-distributed-antenna-systems. And a funny sidebar, Wikipedia still incorrectly reports that 5% of Wi-Fi is deployed over DAS. Don’t believe everything you read on the Internet. While DAS is a good fit for some cellular, it’s suboptimal for Wi-Fi.

Small cells (also known as femtocells or picocells) are like the love-child of Wi-Fi and DAS. Think of it as a Wi-Fi access point (AP) form factor with DAS’s cellular back-end construct. In other words, the small cell is a radio node (like an AP) that redistributes the cellular signal indoors as depicted in Figure 3.

Though the radio appearance is more like Wi-Fi than DAS, small cells have similar tradeoffs as a DAS. Issues include lack of enterprise control (especially over data), operator and network integration complexities, and traffic flow through the carrier core. But in the end, they solve the same primary problem: indoor coverage for critical services, especially voice. Small cells can deliver more capacity than a passive DAS, which makes them more effective for data services in addition to voice and messaging—though they’re usually more expensive.

Contrary to my rant against slicing earlier in this blog, I must admit that it bears many favorable characteristics of a Network-as-a-Service (NaaS) model that will be attractive to some enterprises. So, I can’t write it off altogether. With slicing, the network is owned and operated by the operator, but services and service quality are guaranteed to enterprises with contracts, and subscribed to by the enterprise as a service, then paid by usage—based on device count, SLA requirements, data consumption, or other billing arrangements.

There are still complications with slicing, like device onboarding and policy control, LAN service integration, data privacy, local application delivery (for on-prem services), indoor coverage gaps (do you still need DAS or small cells?), and costs. But, if operators can solve these, along with the general enterprise sentiment towards network control and data ownership, then slicing has a shot for some services.

Maybe I’m biased because of my Wi-Fi background, but I keep wandering back to a question: why force enterprises towards the macro cellular paradigm, along with its complexity and entrenched actors? A more compelling model meets enterprises in their comfort zone. Telecom marketing is quick to denounce Wi-Fi for lack of deterministic performance; but enterprises know and love the Wi-Fi model (most of the time) because of its plug-n-play setup, easy cloud administration, standardized LAN/IP integration, and unlicensed operation. In short, it’s easy, it’s cost-effective, and it works.

Despite the leverage of operators and their preferred models, there’s a whole new set of private cellular companies and approaches embracing a Wi-Fi-like model of simplicity. Radios look and feel like Wi-Fi access points (APs) with zero-touch provisioning (ZTP). As shown in Figure 5, the data plane resides in a small controller-like appliance (virtual or hardware) deployed on-premises—and like the APs, it uses ZTP and plugs into existing LAN/IP frameworks. Management occurs in the cloud as a subscription service. Sound like Wi-Fi yet? SIM/eSIM management and policy is managed through the cloud console, like an enterprise identity platform. There are varying degrees of abstraction and hiding of technical complexity (either by system intelligence and automation or by white glove services) to simplify the entire shebang. 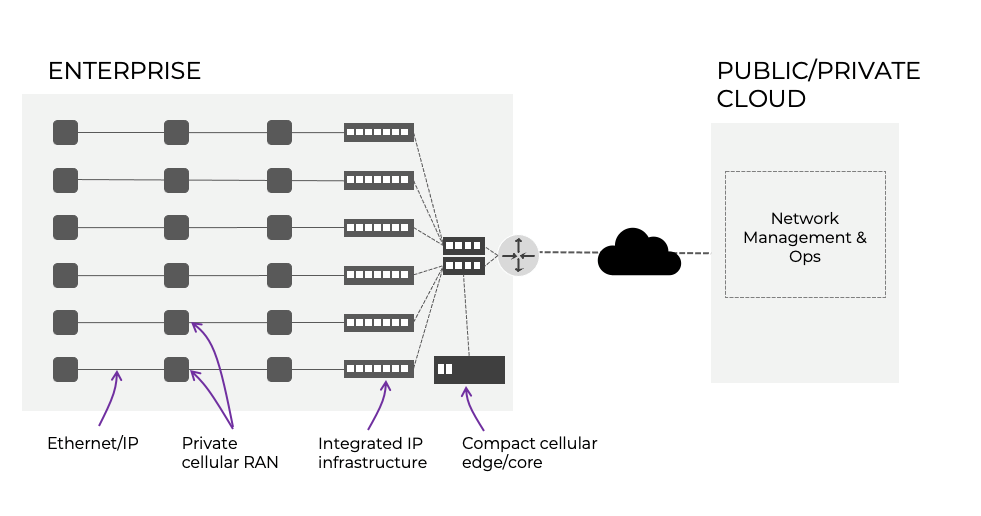 And it’s all owned and operated by the enterprise, with complete control, visibility, and data oversight. Enterprises likely buy the radio hardware as a capital expense while paying for the control plane and management systems (along with support) as a licensed service. Then SIMs/eSIMs (the client authentication mechanism) are bought in bundles depending on the number of devices in use. In this way, the business model looks a whole lot like Wi-Fi, with no per-device monthly subscription to a telco, as with consumer cellular. Instead, the infrastructure is a capital or operational expense (just like other cloud-managed infrastructure), and the client devices are owned outright with no additional monthly subscription.

In the face of all these models as options, there are two supreme principles: spectrum and cost. Spectrum is the lifeblood of all wireless. To that end, spectrum licensing models and general availability will be a driving force for many private wireless implementations. This is why I hedge on my statements about slicing and small cells, because even though enterprises by-and-large prefer more control and less dependency on telcos, spectrum licenses are a cosmic power, wielded by telcos. Conversely, the private cellular Wi-Fi-like model looks really attractive in regions with unlicensed, shared, or lightly licensed spectrum models, like CBRS.

Network as a Service

I mentioned NaaS earlier, so just a quick word here. Many private cellular models can fit the NaaS philosophy, and I think NaaS will win the lion’s share of private cellular buy-in, for two primary reasons. First, cloud apps and services have steered our hearts and minds towards an as-a-service buying philosophy because it offloads all the low-level administration of infrastructure. Networking as an industry has embraced network management as a cloud service. And second, enterprises don’t understand cellular networks (sorry to offend, but it’s true). 5G represents an ocean of foreign technology and terminology, leaving a tremendous skills gap. So whether it is a hosted offering from mobile operators, a managed service offering from an MSP, or other types of integrator-heavy handholding with AI expert monitoring systems, the winning approach to private cellular will look more like as-a-service than not.

I know, this is a business model blog that still gravitates back towards technical implementation models. The good and bad news is that private cellular has many paths—too many options to choose from, but many choices.

In the end, there are a few basic models:

Figure 6 summarizes the broad options. Each one deserves consideration; but first, define the problem that private cellular must solve.