What’s the Difference Between Single and Multi-Channel Wi-Fi?

What’s The Difference Between Single vs MultiChannel Wi-Fi?

In this post, the differences between the two architectures will be analyzed.

First, what is the main difference between these two systems?

MCA Access Points (APs) operate across different channels. For example, if you have three APs on 2.4GHz, they may operate on channels 1, 6, and 11 simultaneously. This channel separation is intended to avoid Co-Channel Interference (CCI) (when a Wi-Fi radio hears another radio transmitting on the same frequency, it must not transmit, but rather defer transmission until it has regained control of the channel through standardized methods of channel access (CSMA/CA)).

SCA would have those same three APs operating across a single channel, utilizing proprietary access mechanisms (CSMA/CA is not designed with SCA in mind!).

Why are there two different architectures? When Wi-Fi first came to Market, MCA was the only option and it came with several problems:

When Wi-Fi first came to Market, MCA was the only option and it came with several problems:

When Wi-Fi first came to Market, MCA was the only option and it came with several problems

A less well know detail is that although handoff in SCA is near-seamless, the decision for the handoff takes time and is heavily dependant on AP placement and cell overlap.

Does this mean SCA is superior? Not quite. SCA was a fantastic idea at inception and solved several problems. Since then, however, the industry has witnessed much change:

With these improvements in mind, the use case for SCA has become increasingly limited (hence why most vendors have chosen to develop around MCA).

As the foundational benefits of SCA have slowly been eroded, alternative advantages are being touted. One such advantage is ‘to achieve the highest data rates, SCA is the only choice’. Let’s examine this claim. 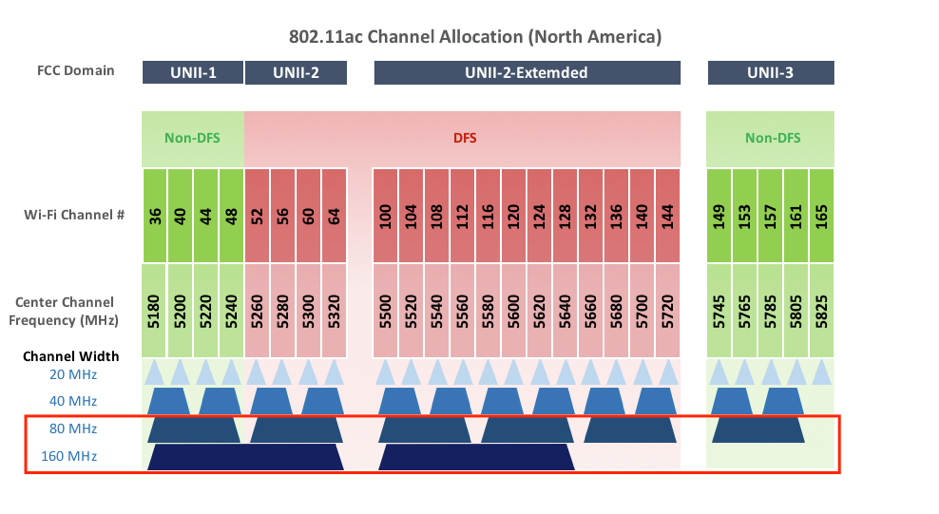 With MCA, (referencing the above illustration) it is, therefore, possible to have 6 APs using 80MHz channels or two APs using 160MHz before co-channel interference becomes a consideration. With SCA, all APs can share the same 160MHz-wide channel – great!

Unfortunately, receive sensitivity decreases for any radio operating on a wider channel. The wider the channel, the worse things get. A stronger signal and better SNR is therefore required to achieve the higher data rates offered at 160MHz. With SCA, it is likely that transmissions from APs and clients further away will contribute to raising the noise floor, subsequently decreasing SNR, meaning an even stronger signal is required. The result is higher data rates become increasingly difficult to hit. Furthermore, any DFS event (true for false positive) requires a channel change. This change can break the Virtual Cell which requires stations to handle the roaming process on their own after all!

Ultimately, it is impossible to change the laws of physics. These laws dictate that if energy is emitted at any given frequency, energy from a different source emitted at the same frequency has the potential to interfere. SCA attempts to address this by using collision avoidance mechanisms.

The unavoidable truth is that the more clients attempting to transmit simultaneously, the worse performance becomes as clients end up queuing for their turn. This happens irrelevant of using 20Mhz or 160MHz channels as shown through figures 1.4-1.7. 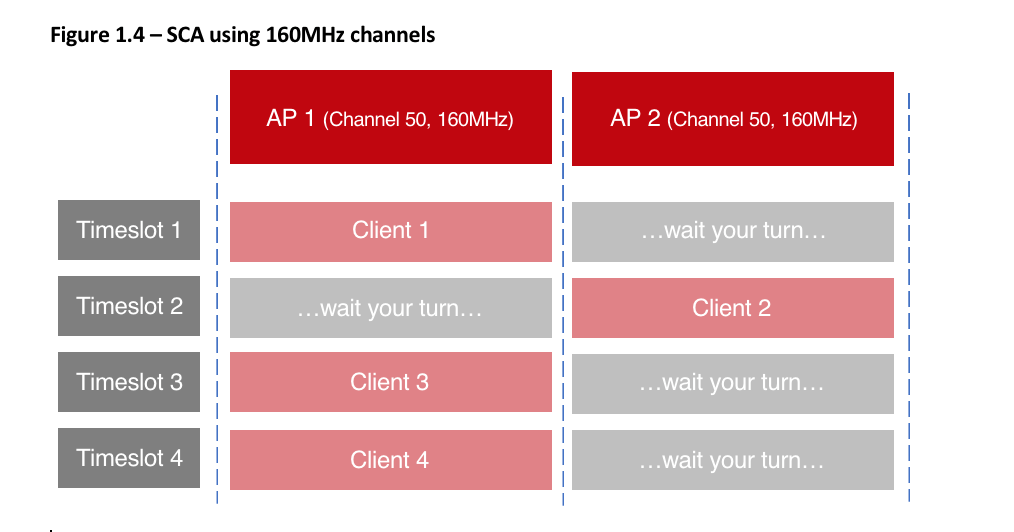 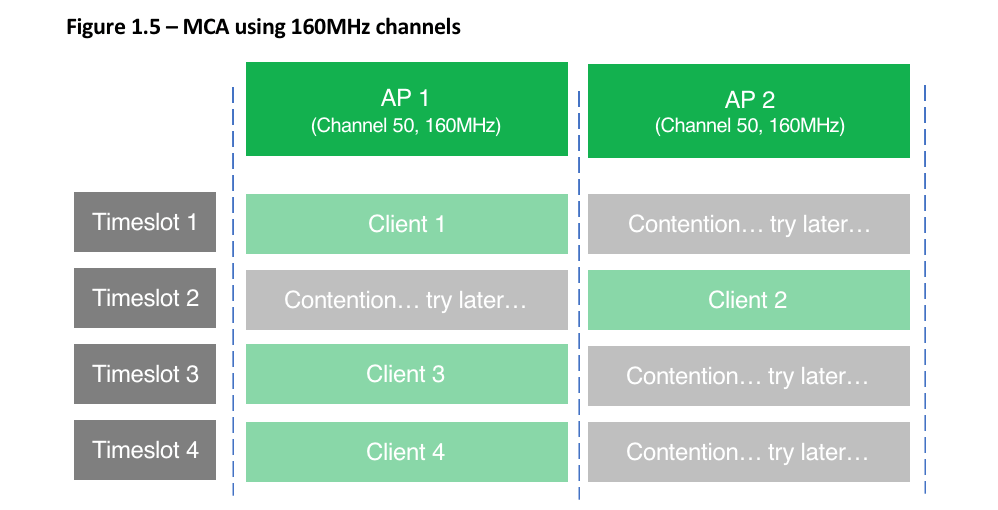 As illustrated above, whether using SCA or MCA, contention is addressed by using some form of collision avoidance mechanism. There is no advantage to either platform – if CCIs present across a 160MHz-wide space, any following client must wait its turn or reduce channel width to talk without encountering interference. With that said, the use case for 160MHz is extremely limited. Basically, unless you’re benchmarking or your network consists of a couple of APs with no neighboring networks or potential for DFS hits, 160MHz is impractical.  You’ll introduce unnecessary co-channel contention (CCC) and reduce the range of your APs. 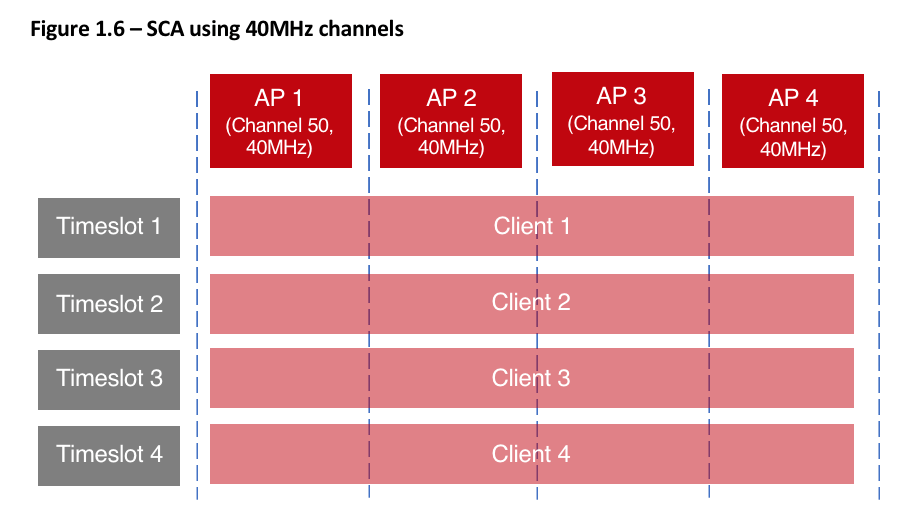 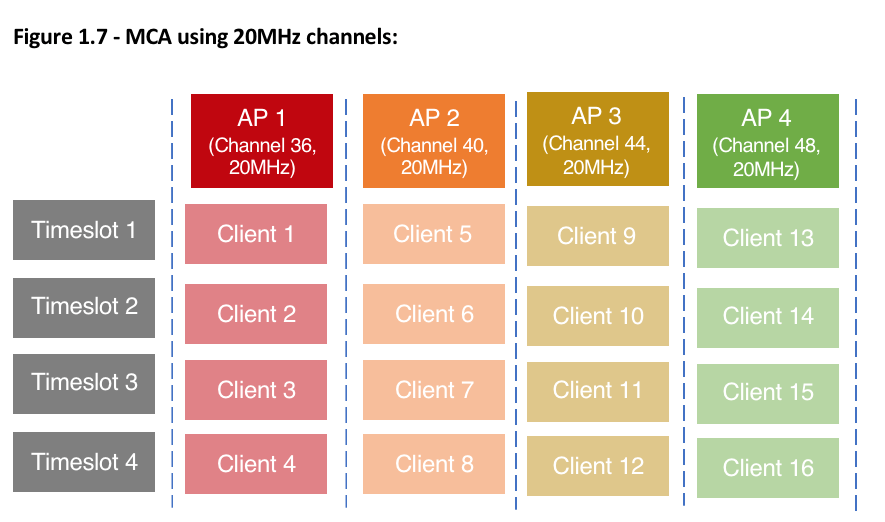 Additionally, it’s worth noting that regardless of channel width (and high data rate potential), a large portion of traffic will still be broadcast at 20MHz with legacy rates. This leaves the rest of the 160/80/40MHz channel idle. With narrower channels, this inefficiency (protocol overhead) is reduced, and spectrum utilization is increased.

The touted ability to operate multiple APs across a single, wider channel is ultimately negated as clients must round-robin their communication across the virtual cell/collision domain. With 802.11ac, channels will automatically reduce in size when interference is present which in turn reduces data rates. Combined with the effect DFS has on virtual cell operation, a very large question mark hangs over the usefulness of wider channels with SCA.

With SCA, if there is a requirement to extend throughput capacity of the network, the solution is to ‘layer’ channels. This involves multiple layers of virtual cells. For example, three APs on channel 36 and three APs on channel 40. Of course, this is almost an admission to MCA (but ends up costing a lot more money!)

Despite the two platforms achieving the same goal (communication), MCA ultimately has more flexibility and the performance potential (if deployed correctly!) when multiple clients need to transmit simultaneously and scalability/density is a concern.