A question that I keep getting asked about Wi-Fi 6 technology is: “Will 802.11ax make 80 MHz and 160 MHz channels usable in the enterprise?” In theory, BSS color combined with the spatial reuse operation could provide the capability to take advantage of 80 MHz channels in the enterprise. However, this would be practical only if legacy clients were not in the same physical location.

The 802.11ax draft amendment does define an optional capability called preamble puncturing which could allow a Wi-Fi 6 access point to operate at 80 MHz or 160 MHz without interference from a legacy BSS. Preamble puncturing allows an 802.11ax access point to transmit a “punctured” 80 MHZ channel or 160 MHz channel if some of the secondary channels are already in use by nearby legacy radio. 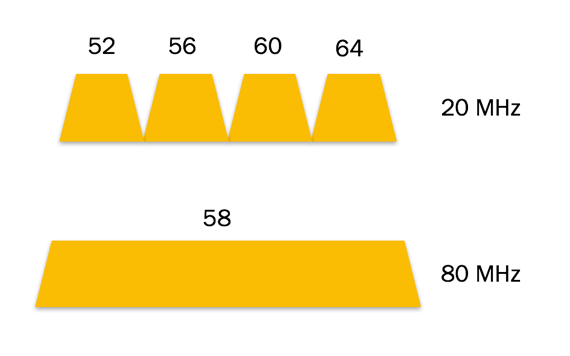 Although not often implemented, 802.11ac radios are capable of a dynamic bandwidth operation where an AP can change the channel-width on a per frame basis. In the example shown in Figure 2, an 802.11ac access point that is transmitting on an 80 MHz channel might hear a nearby AP or client station of an overlapping basic service set (OBSS) on channel 56.  Instead of deferring transmission on the entire 80 MHz channel, the AP might fall back to transmitting only on its primary 20 MHz channel 52. 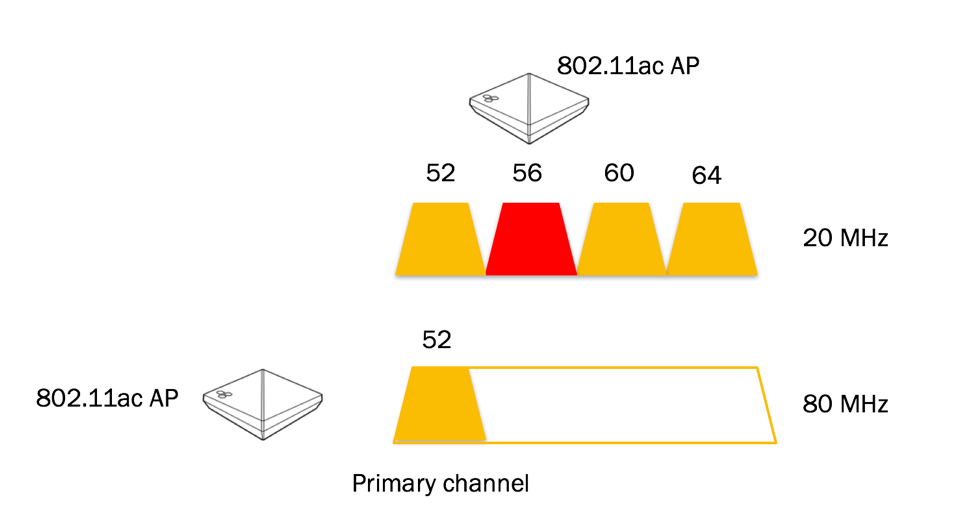 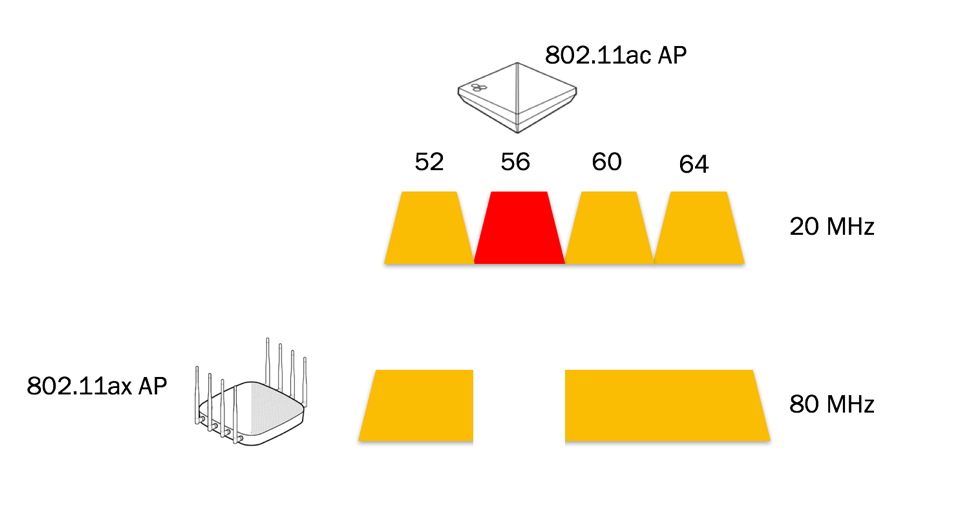 For preamble puncturing to work, both the 802.11ax AP and the receiving 802.11ax clients would have to support the capability. Please note that an 80 MHz or 160 MHz can only be punctured on secondary channels and never on the primary channel. As previously mentioned, this is considered to be an optional capability and it remains to be seen how widely it will be supported.

Do I think that preamble puncturing and BSS color will allow us to immediately use 80 MHz channels in the enterprise? No, certainly not anytime soon, however, you can at least see that the IEEE is thinking about better efficiency for large channels. That stated the biggest gain in efficiency with 802.11ax will be the result of smaller sub-channels. In future blogs, we will discuss OFDMA partitioning of a 20 MHz channel into very small sub-channels for simultaneous communications.

802.11ax technology is the foundation of a generational paradigm shift occurring with Wi-Fi technology…. Wi-Fi 6.  If you want to learn more about 802.11ax, please download the FREE eBook I authored: ‘Wi-Fi 6 for Dummies’, a complete guide for everything you need to know to get ahead of this shift and future-proof your network.  To download your free copy, scan the QR code or follow this link: 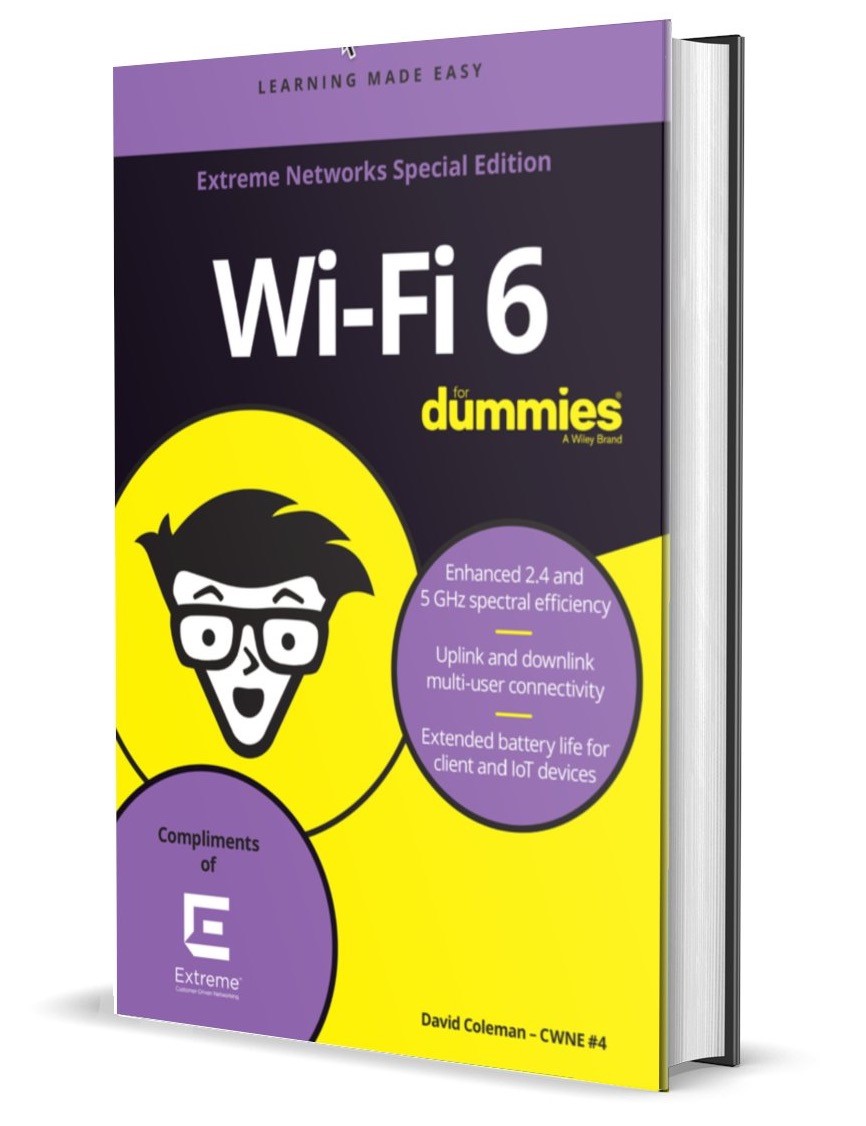 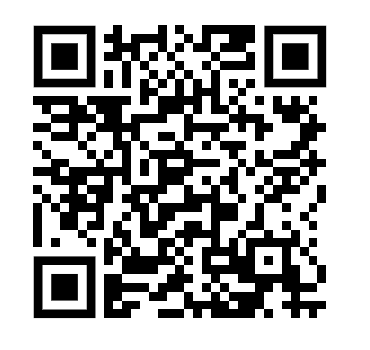 Included in your free guide:

The Adventures of the Energy Metrics Data Collector – Going Green with Networking Technology
Don’t Let Your Branch Office Become the Forgotten Child
They said it: Extreme Connect 2022 customers weigh in on 5G and Wi-Fi
Should Remote Workers Determine Your Enterprise Network Design in a Zero Trust World?
Celebrating Extreme’s Outstanding Women in Engineering