David Coleman Director, Wireless Networking at the Office of the CTO Published 18 Jun 2021

This is a third in a series about Wi-Fi dinosaurs that are now mostly extinct.  As mentioned in the original Wi-Fi Nostalgia blog, I have been cleaning out my office and purging myself of geriatric WLAN equipment.  In celebration of this year’s World Wi-Fi Day on June 20th, I will share a few more Wi-Fi memories in this blog.  The main focus of this blog will be the 802.11 fossils known as autonomous access points.

Legacy access points were standalone devices that functioned as a wireless portal into a pre-existing wired network.  These APs were often referred to as fat APs, or thick APs. However, the most common industry term used for these legacy access points was autonomous APs.  Initially, there was no way to centrally manage autonomous APs and they possessed minimal control plane intelligence. Initially, these APs had to be independently configured and monitored.

Many moons ago, I manually configured numerous Symbol AP-4121 and AP-4131 autonomous access points as shown in Figure 1. 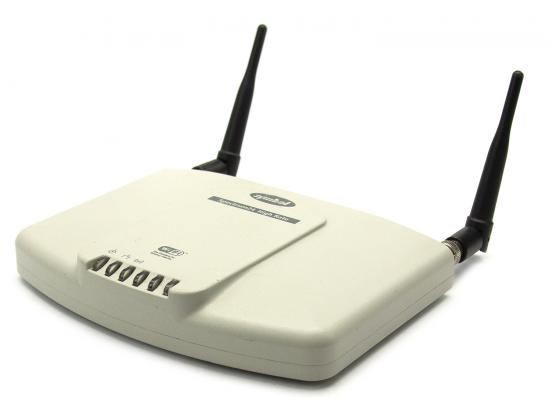 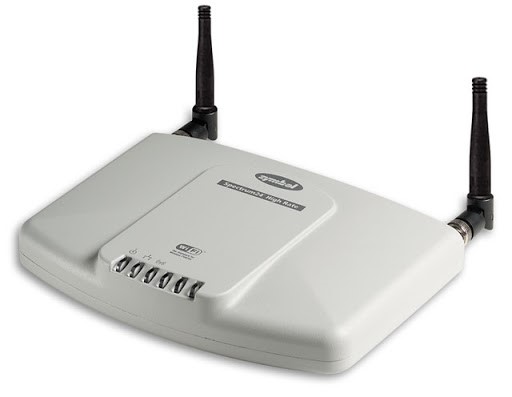 To give you an idea of how Wi-Fi was used in the enterprise 19+ years ago, take a look at this diagram from the old Symbol AP-4121 deployment guide. Checkout the bulky desktop, laptop, and handheld scanner depicted in Figure 2. 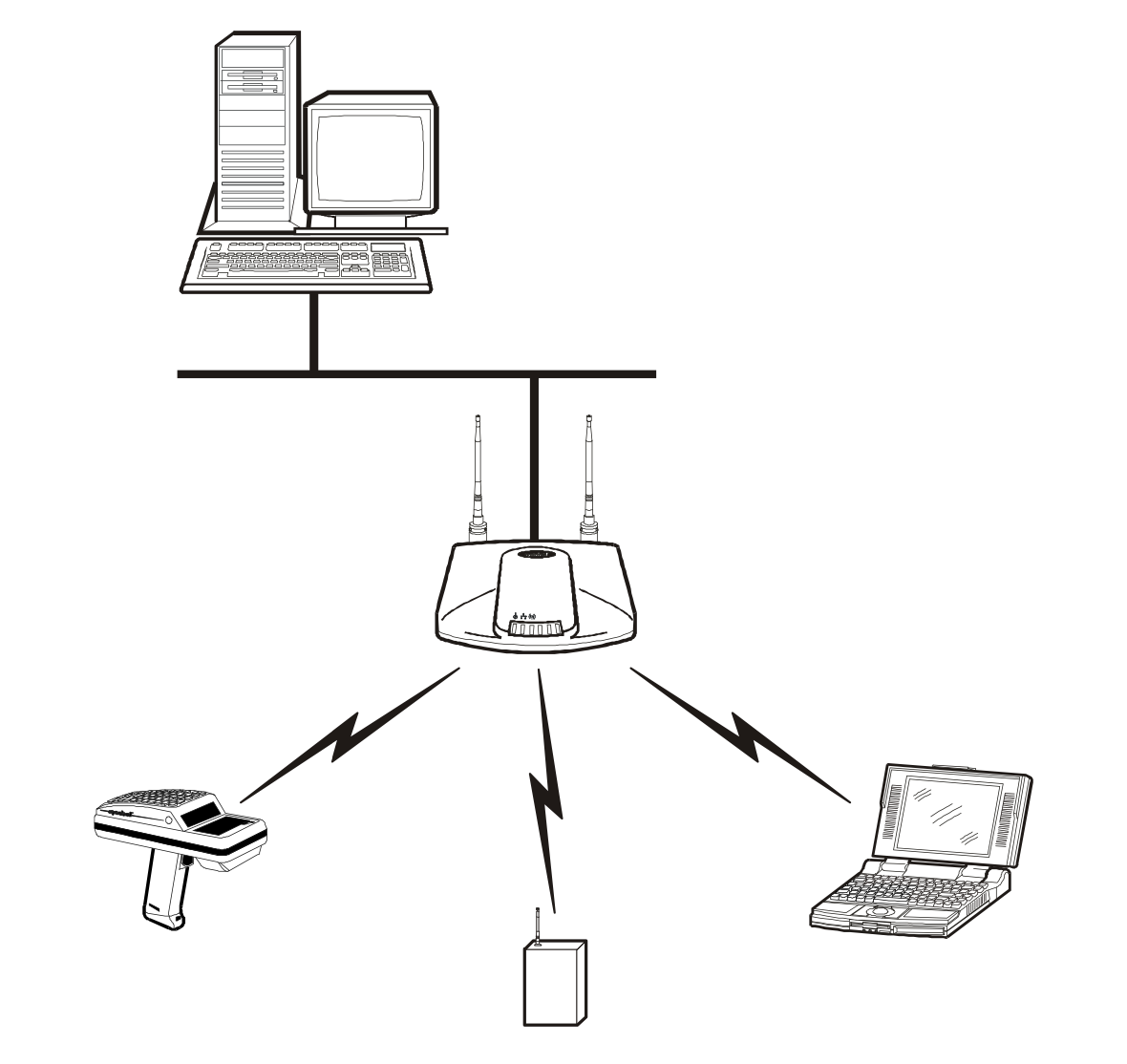 Most of my original autonomous APs were 802.11b. In 2004, I was able to upgrade my 2.4 GHz radios with a screaming fast 54 Mbps 802.11g radios is some of my APs. I did an upgrade during a CWNA training class and I was in hog heaven.  However, I very quickly learned about a nasty little 802.11g beast called the “protection mechanism” which allowed for the co-existence of HR-DSSS and ERP-OFDM technology in the same band.  As many of you know, RTS/CTS or CTS-to-Self protection was defined in 802.11g and the layer 2 overhead was significant and impacted throughput.

Think about how overcrowded the 2.4 GHz band is today and very how the 2.4 GHz band is often unusable for reliable Wi-Fi communications.  Can you imagine purchasing an access point that only transmits on 2.4 GHz?  In reality, a good majority of the autonomous APs manufactured by enterprise Wi-Fi vendors did not have 5 GHz radios because dual band APs were simply too expensive. Overtime 5 GHz radios became affordable and dual-frequency band APs become standard offerings.  Times have certainly changed, as tri-frequency band APs are on the horizon with the advent of 6 GHz and Wi-Fi 6E.

Another thing to remember about the majority of legacy autonomous APs is that they did not have Power-over-Ethernet (PoE) capabilities and AC power was required.  Thankfully, PoE has now long been a necessary marriage when deploying enterprise access points. The 30+ watts defined by PoE+ and 802.3at is pretty much the norm when deploying current generation 4×4:4 access points.

So does anyone remember the original operating system on Cisco Aironet autonomous access points?  The real-time OS was VxWorks, which is the same OS used by NASA on the Mars Pathfinder missions. Contrary to popular belief, there was not Wi-Fi on any of the Mars rovers.  Figure 3 shows the configuration GUI on an old Cisco 340 AP using VxWorks. 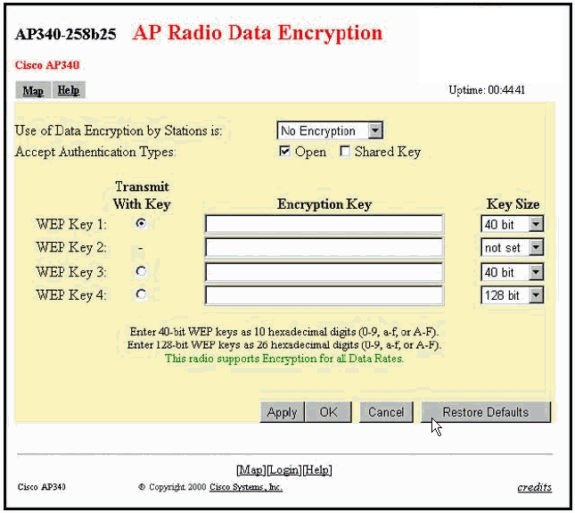 Although Symbol and Cisco had a large share of the autonomous AP market, there were other big players including Agere, Proxim, Intermec, and others. One of the more popular autonomous APs was the ORiNOCO AP-1000, which had two modular, and removable PCMCIA radios as shown in Figure 4. One radio was usually a 5 GHz radio and the other was a 2.4 GHz radio.  However, people used to actually put in two 2.4 GHz radios instead simply because there was not a lot of 5 GHz clients back in those days.  The problem was that the two 2.4 GHz ORiNOCO Gold cards would interfere with each other because they were right next to each other inside the AP and were not shielded.  To solve this problem, WLAN installers would use the external antenna connector for both of the radios and position two external antennas about 30 feet or more apart.  I still crack up laughing when I think about how often people actually deployed Wi-Fi in that manner.  Proxim Wireless eventually purchased the ORiNOCO brand from Agere Systems. Also, check out the serial port connector on this aged beauty!

Figure 4 – Does this thing still work?

Another thing to remember about autonomous APs is that for the most part they were just plain ugly.  They were bulky, heavy, often had external antennas and simply not sexy.  Every year, a World’s Ugliest Dog Contest is held in Petaluma, CA.  One of these days, I am going to organize a World’s Ugliest AP Contest.  Over the years, enterprise Wi-Fi vendors have realized the importance of aesthetics and as a result, indoor APs are now much easier on the eyes.

One of the biggest challenges with autonomous APs was how to manage them if you had hundreds or more deployed.  As previously mentioned, initially all APs had to configure independently and there was no centralized monitoring solution.  A company called AirWave introduced a wireless network management server that could be used to configure autonomous APs, and push firmware to the APs. The AirWave management server was used to manage and monitor many different Wi-Fi vendor autonomous APs.  Aruba Networks eventually purchased AirWave.  Several vendors introduced their own network management solutions such as Cisco’s Wireless Lane Solution Engine (WLSE). The WLSE was the ugly duckling of Cisco’s SWAN architecture.  With all due respect to Cisco, most of us WLAN professional old-timers do not have fond memories of the WLSE.  In today’s world these wired and wireless network management systems have been replaced with cloud-based management applications like ExtremeCloud IQ.

Because old autonomous APs did not have a lot of horsepower, these legacy devices also did not have a lot of control plane intelligence such as role-based access control mechanisms.  Two companies introduced a short-lived solution known as an Enterprise Wireless Gateway (EWG). An EWG was deployed behind autonomous APs and could be used to define different wired access roles and rules for wireless users. One of the worst investments I ever made was spending $6000 on a Vernier Networks 6500 Gateway. The solution was fantastic, unfortunately, it was also short lived because the WLAN controller architecture debuted and quickly replaced the need for using an EWG.  Bluesocket was another company that also manufactured WLAN gateways, but they quickly saw the light and transitioned into a WLAN controller company.  Bluesocket assets now owned by Adtran.

Autonomous APs ruled Wi-Fi for many years but eventually a new WLAN architecture had to emerge.  In 2003 – The Jurassic Age of WLAN

Perhaps in a future Wi-Fi nostalgia blog, I will discuss the history of WLAN controllers. Even though WLAN controllers still exist, the majority of enterprise vendors have moved on to a distributed Wi-Fi architecture with cloud-based management.

In 2019, Wi-Fi technology celebrated its 20th birthday. It is hard to believe that that Wi-Fi has now been around for 22 years. And now, the year 2021, marks Extreme Network’s 25th anniversary – a milestone in any industry. And throughout those years, Extreme has been an industry leader in delivering enterprise-class Wi-Fi networking solutions. I hope you have enjoyed this little stroll down Wi-Fi memory lane.

Wireless Security in a 6 GHz Wi-Fi 6E World
5G Orientation – a Video Summary
The Stadium Network: A Microcosm of the World
Extreme Customer Sends Packets Flying Through 6 GHz Space
Rock and Rolling with the Giants. An Interview with Extreme Hero Alberto Guerrero.