David Coleman Director, Wireless Networking at the Office of the CTO Published 14 Jun 2021

This is my second blog about Wi-Fi dinosaurs that are now mostly extinct. Long before I came to work for Extreme, I ran my own Wi-Fi consulting and training company for 10 years. A few years ago, I decided to finally cleanse my home of equipment from the Wi-Fi horse-and-buggy days. The focus of this blog will be antique Wi-Fi client devices.

In the early days of enterprise Wi-Fi deployments, the majority of devices connecting to an enterprise WLAN were laptops used by employees. Laptops did not have embedded wireless network interface cards (NICs) and instead the Wi-Fi form factor was PCMCIA radios. Many vendors manufactured 802.11 PCMCIA cards, but the two vendor radios that I used the most were either Lucent/Agere or Cisco. As shown in Figure 1, Lucent had a series of bronze, silver, and gold PCMCIA Wi-Fi radios using the WaveLAN chipset. The most common brand name of these cards was ORiNOCO, however, these radios were rebranded under many different names. The legacy Bronze was an 802.11 DSSS radio.  The ORiNOCO Silver was an 802.11b radio but it only supported 64-bit WEP encryption. The infamous ORiNOCO Gold card was also an 802.11b radio that brought us the ultra-secure 128-bit WEP. Some of you might also remember that a firmware upgrade of an ORiNOCO Silver card could magically turn it into an ORiNOCO Gold card. I’m joking about ultra-secure, because it was not long before WEP cracking tools were freely available. 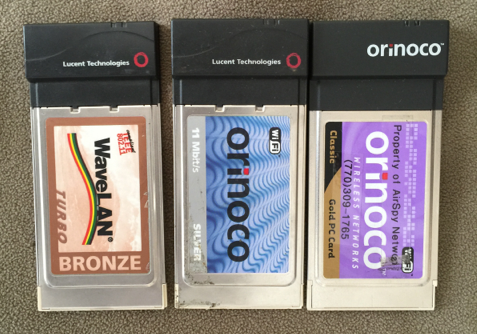 One of the main reasons that the ORiNOCO client devices were so popular was the fact that they had an external antenna connector. As shown in Figure 2, the ORiNOCO PCMCIA cards could be connected to a pigtail connector, which was then connected to either an omnidirectional or unidirectional external antenna. There was not a more perfect Wi-Fi radio for WarDriving and other outdoor wireless activities. From 2000 – 2005, most of the wireless penetration or “hacking” utilities were written around the chipset found in the ORiNOCO Gold card. 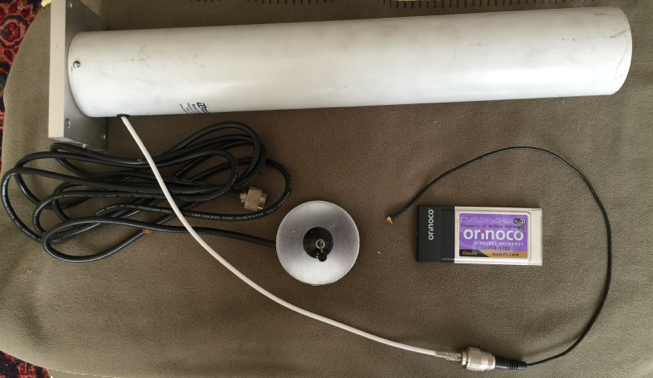 Cisco also made some quality PCMCIA client adapters, and they were used extensively in enterprise deployments together with Cisco autonomous APs. As shown in Figure 3, PCMCIA adapters with both internal and external antennas were available. 802.11g PCMCIA radios for laptops were also very prevalent, but eventually laptop manufacturers moved towards embedded Wi-Fi radios. 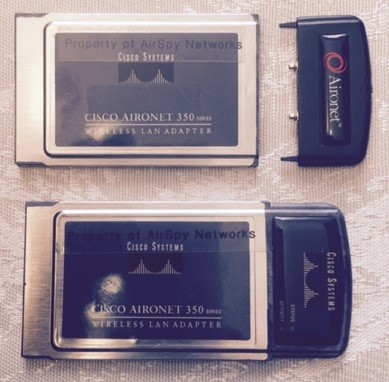 Although the PCMCIA client radios were the most widely used, many other Wi-Fi radio form factors existed including Compact Flash (CF), Secure Digital (SD), ExpressCard, and Universal Serial Bus (USB) radios.  As shown in Figure 4, wireless PCI adapters could also be used to give a desktop computer wireless connectivity. 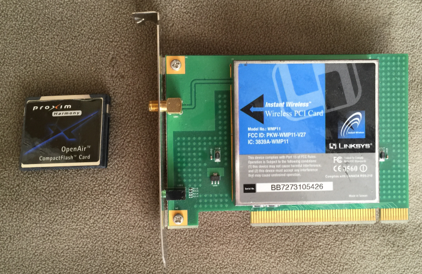 What about mobile devices? In the early days of Wi-Fi technology, the only mobile devices were wireless handheld scanners and eventually Voice over Wi-Fi (VoWiFi) phones. Tablet PCs and smart phones had yet to debut. However, my first mobile device was a personal digital assistant (PDA). As shown in Figure 5, I used an 802.11b Symbol compact flash radio with my PocketPC and I even had a CF to PCMCIA adapter so that I could use my ORiNOCO Gold card with my PDA.  How cool is that?

Alas, in today’s wacky world of Wi-Fi almost all 802.11 radios are embedded in the laptop or mobile device. 802.11 USB radios are still often used together with Wi-Fi design and troubleshooting tools, but embedded radios are the norm.

So exactly how did someone actually configure these client devices? As mentioned previously, older laptops required a PCMCIA adapter. These radios could be configured in Windows XP using the Wireless Zero Configuration (WZC) found in the Windows operating system. But to be brutally honest, the WZC really sucked. Most people choose to disable the WZC and instead use the WLAN vendor’s software client utilities. Figure 6 depicts both the ORiNOCO and Cisco software client utilities. 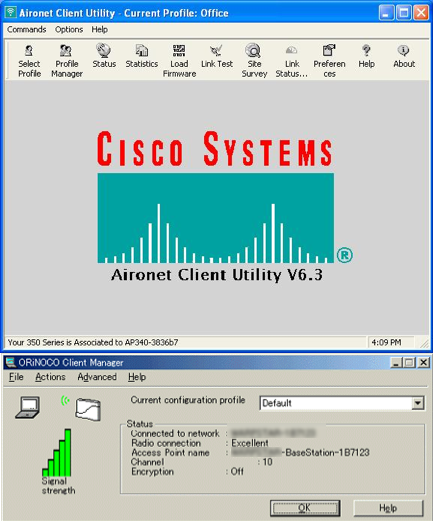 As 802.1X/EAP security became more widespread, I used to recommend Funk Software’s third-party software client utility. As shown in Figure 7, the Odyssey Client supported multiple flavors of EAP protocols and could be used with just about any Wi-Fi radio. 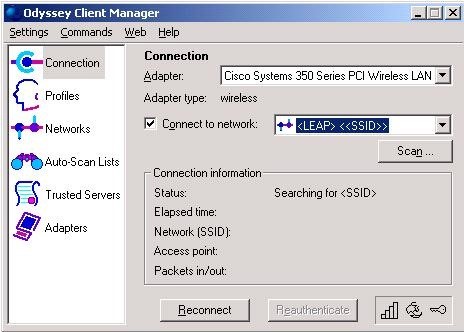 Over the years, the client utilities in Windows, MacOS, iOS, Android, and other operating systems have vastly improved and overlay supplicants are not used very often.

Over the last 22+ years, a lot has changed in regard to Wi-Fi client radios. Personal mobile Wi-Fi devices, such as smartphones and tablets, have been around for quite a few years. The Apple iPhone was first introduced in June 2007, and the first iPad debuted in April 2010. HTC introduced the first Android smartphone in October 2008. Mobile devices have now far exceeded the number of laptops that connect to enterprise Wi-Fi networks. As we continue move forward with the era of “Internet of Things (IoT), Wi-Fi radios are now found in doorbells, thermostats, sensors, appliances, and just about anything you can imagine.

In 2019, Wi-Fi technology celebrated its 20th birthday. It is hard to believe that that Wi-Fi has now been around for 22 years. And now, the year 2021, marks Extreme Network’s 25th anniversary – a milestone in any industry. And throughout those years, Extreme has been an industry leader in delivering enterprise-class Wi-Fi networking solutions I hope you have enjoyed this little stroll down Wi-Fi memory lane. In celebration of this year’s World Wi-Fi Day on June 20th, I will share more Wi-Fi memories a few more blogs.

Can We Stop Comparing 5G with Wi-Fi 6?
Enabling the Future – Extreme’s Intern Program
Blockchain for Smart Communities & Infrastructure
How far will Wi-Fi 6E travel in 6 GHz?
A Familiar Way of Doing Business: An Interview with Roberto Rodríguez Torres