Wi-Fi 6 for Sports & Venues – 4 Things You Should Know Wi-Fi 6, also known as .11ax, is the newest iteration of Wi-Fi technologies and a hot topic in the industry today – whether you work directly in IT networking or not.  Because Wi-Fi impacts most, if not all, of us on a regular basis we naturally have a vested interest in what Wi-Fi 6 is and what it means for the user experience moving forward, but there are also specific questions and misconceptions related to this iteration of Wi-Fi, and certainly unique considerations for Sports & Public Venue environments.

With all this in mind, let’s take a look at 4 Things You Should Know for Wi-Fi 6 in Sports & Venues.

Network coverage and capacity demands continue to grow; this is especially true for sports venues, which experience heightened density and bandwidth challenges when delivering Wi-Fi connectivity to tens of thousands of guests simultaneously.  The number of users, devices, and applications connecting to Wi-Fi and how we’re relying on Wi-Fi networks – like increased engagement with streaming/on-demand video, increased number of IoT devices accessing the network, for example – is only growing and doesn’t appear to be slowing down in the near future.  There are well-documented examples of these usage trends across both professional and collegiate sports in the United States.

Looks look at the National Football League.  The majority of NFL teams and their venues have guest Wi-Fi networks and have offered Wi-Fi to their fans for at least a few seasons, so we have a legitimate understanding of how usage has evolved historically.  Take NFL Wi-Fi Usage Trends from the ’18-’19 Season; last season teams saw an average of 45% of in-stadium fans connecting to Wi-Fi, a 30% increase from the ’13 NFL season.  With increased Wi-Fi connections comes increased bandwidth.  An average of over 4TBs of data a game were transferred across NFL Wi-Fi networks, which is roughly 1,500 hours of streaming HD video.  This may seem like a lot (and it is) but major, high-profile events are blowing these numbers out of the water.  This year’s Super Bowl in Atlanta saw 69% of unique fans connect to Wi-Fi, transferring an astounding 24.05 TBs of data (over 1 TB of this was from social media platforms alone). 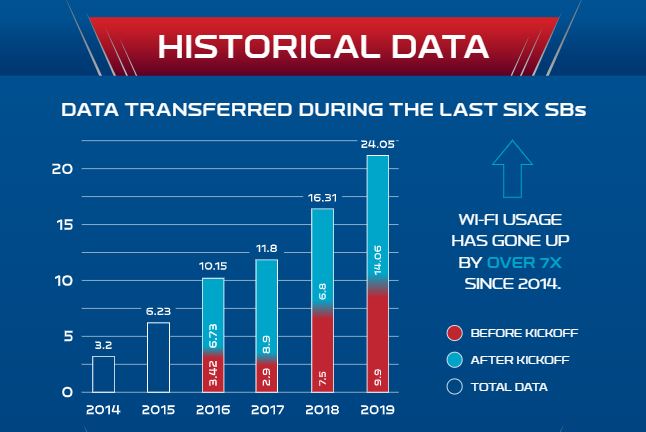 [Wi-Fi usage has increased over 7x since 2014, with Super Bowl LIII seeing over 24TBs of data across the network.  Check out all the metrics from this year’s Big Game here.]

The Super Bowl may be a hyperbolic use case, but it isn’t totally an anomaly either. There are several examples of massive Wi-Fi usage numbers at major sports events, which also clearly illustrate the direction and general usage trends occurring in the industry today, even if these numbers aren’t consistently observed at every sports/venue event.

Understandably, there is a lot of hype associated with this iteration of Wi-Fi, but of all the industries and environments Wi-Fi 6 technologies should arguably offer some of the greatest benefits for sports and public venues, including both outdoor, open-air stadiums and enclosed arenas.  So what exactly are some of the potential benefits?

Traditionally a Wi-Fi radio could only talk to a single client at a time, so two-radio APs could talk with two clients concurrently.  Now an AP could potentially support over a hundred clients, but they were still limited to one client at a time, per radio.  This changed with Wi-Fi 6 when a new protocol was introduced: Orthogonal Frequency-Division Multiple Access (or OFDMA) allows a single radio to communicate with multiple clients simultaneously, meaning the communication is now in parallel versus successive.  It also means devices being ‘talked to’ can also respond to the access point at the same time too. This brings significant performance and capacity advantages for environments with thousands of connected users/devices and supports more advanced, bandwidth-demanding mobile activities – like streaming HD video.

Wi-Fi 6 also brings augmented efficiency, by increasing data encoding proficiency which results in higher throughput.  At a high-level, more data is packed into the same radio waves as the chipsets that decode and encode RF signals are more robust and can handle increased workloads.

In addition, Wi-Fi 6 supports both 2.4Ghz and 5Ghz bands where previous Wi-Fi iterations could not.  While most of our mobile devices are transitioning to 5Ghz, due to the faster data rates, 2.4Ghz devices still exist in the industry today.  For example, legacy phones, scanners, and many IoT devices are supported by 2.4Ghz in certain deployment scenarios. It’s important to support both technologies in the foreseeable future.

Connecting and reconnecting to Wi-Fi networks can be taxing on a device’s battery life.  This process is especially true for users and devices that roam in and out of the range of Wi-Fi signals.  The increased range and efficiency of Wi-Fi 6 will make it so connecting to Wi-Fi will be less draining on devices, but so will ‘wake time targets.’

Wake time targets allow a wireless access point to communicate with connected devices, in order to notify how long devices can sleep or go into dormancy between talking to (receiving signals) the AP, as well as when it needs to be active to communicate with that AP again.  This downtime will go a long way in preserving the battery life of personal devices (like smartphones, tablets, etc.) and IoT devices.

Users (and their devices) may not experience the full breadth of Wi-Fi 6 benefits in the immediate future, but Wi-Fi 6 networking solutions have already been engineered and are available today, designed to meet the unique requirements and demands of sports and public venues.  To this point, at the beginning of 2019 Extreme Networks announced the first set of stadium-specific Wi-Fi 6 wireless access points, specifically designed to provide robust connectivity in the densest, challenging environments, equipping in-venue networks with improved capacity, increased bandwidth, and ability to support more devices and advanced immersive applications.

Extreme was the first to go to market with a complete Wi-Fi product family, with the industry’s first set of venue-specific Wi-Fi 6 access points, including:

Extreme’s set of wireless access points, which span a cross-section of uses and deployment scenarios, ensures any sports venue can be outfitted with the latest and greatest in Wi-Fi technology, regardless of the physical or architectural characteristics (or challenges) of the particular environment.

Lastly, while Wi-Fi 6 promises to deliver considerable improvements to the speed, bandwidth, and coverage of Wi-Fi systems, 5G, the next generation of mobile network technology, promises to offer similar advancements for cellular-based networks and their carriers (like Verizon, AT&T, T-Mobile, etc.).  One question on everyone’s mind: will 5G make Wi-Fi obsolete not-to-distant future?

There’s certainly a lot of speculation and conjecture surrounding this proposition, and in truth, no one can definitively know the answer, but the consensus among industry experts is ‘no,’ 5G will not completely replace Wi-Fi solutions. And in fact, the two technologies will continue to be widely used and remain complementary in nature for years to come.

There are a few reasons behind this commonly-held belief.  Wi-Fi is and will still be used in residential and enterprise settings, where bandwidth and connectivity must be distributed to a larger (and growing) number of connected devices.  This vast array of devices in production (tablets, smartphones, IoT, etc.) will still have built-in Wi-Fi; in some cases, they only have Wi-Fi and not LTE.  This means they’ll need to be supporting by the Wi-Fi spectrum for many years to come.

Fundamentally, there isn’t a strong technological reason to replace Wi-Fi either.  Sure, improvements to LTE will continue, but this is the same for Wi-Fi technologies.  As outlined above, Wi-Fi is only getting faster, more reliable, and capable of supporting an increased number of Wi-Fi devices.  For sports and public venues, the densely populated nature of these environments nearly requires smaller-cell Wi-Fi technologies to ensure heightened coverage and capacity, in addition to in-venue, cellular-based DAS (distributed antenna systems) systems that are installed by carriers or a neutral host third-party provider.  Both are required for a quality mobile experience for guests, and that doesn’t seem to be going anywhere anytime soon.

For more information on Wi-Fi 6, Sports & Public Venues, and more, check out the resources below: