Reflections on 20 Years with Wi-Fi

For more than 20 years, Wi-Fi has been the staple of enterprise connectivity, and it remains so today. Its ubiquity will ensure that even as the wireless ecosystem continues to expand, Wi-Fi will be a core, irreplaceable infrastructure coexisting with the likes of 5G, CBRS, and other next-generation wireless innovations, to connect people, technology and communities.

There are more than 13 billion Wi-Fi devices in use today according to the Wi-Fi Alliance. Wi-Fi connects more devices and carries more traffic than all other wireless technologies combined, underpinning everything from email systems in office buildings to digital fan experiences in sports and entertainment venues to life-saving medical equipment in hospitals and healthcare facilities. Today, Extreme Networks joins the international Wi-Fi community in celebrating World Wi-Fi Day and the critical role it plays in connecting people, technologies and companies around the world.

For example, Waterman, one of the fastest-growing co-working facilities in Australia, offers reliable, high-density Wi-Fi to power the BYOD environment new businesses rely on to do their jobs every day. One of the largest annual outdoor music and sports festivals in Europe, Zwarte Cross, provides Wi-Fi connectivity to its 220,000 attendees to transform the event into an experience that’s mobile, social and shareable. And in the United States, Bowen Center depends on Wi-Fi to deliver best-in-class patient care, supporting its EMR system, telemedicine initiatives, and mission-critical medical devices.

Extreme has played a significant role in not just advancing the evolution of wireless connectivity, but in setting the standards for interoperability. Two of our heritage companies, Symbol Technologies, and Enterasys Networks, then a Cabletron Systems company, were early members of the Wireless Ethernet Compatibility Alliance (WECA).

WECA was formed to provide rigorous interoperability testing for PC wireless LAN cards, devices and access points from different vendors to make the buying decision easy for the consumer. Thanks to their early efforts, any product with a Wi-Fi logo works out of the box with any other product that has a Wi-Fi logo.

Wi-Fi connected devices have come a long way since the first 802.11 standard was announced. Way back then products that connected wirelessly were called WaveLAN. A 2003 Wired article in 2003 described it as “A box the size of a paperback and costing no more than dinner for two, magically distributes broadband Internet to an area the size of a football field. A card no larger than a matchbook receives it. The next laptop you buy will probably have Wi-Fi built in. Wires may soon be for power alone.”

Since that time 20 years ago, Extreme Networks and its heritage companies have led Wi-Fi development on both the client and infrastructure (access point) side, including driving advancements in controller, controllerless, and cloud-based solutions.

From my early days at Enterasys and Cabletron, Chantry Networks, and Siemens, I’ve had a front row (and at times driver) seat in bringing Wi-Fi to market, including setting foundational CAPWAP standards. Twenty years later, the edge technologies innovation velocity continues to increase, and we are strategically positioned to capitalize on our investments in Wi-Fi.

Now, in 2019, Extreme is the first to offer Wi-Fi 6 access points that are purpose-built for stadium environments. We are the Official Wi-Fi Solutions Provider of the NFL, including 28NFL stadiums, as well as numerous collegiate, pro sports, and eSports. venues, thanks to its expertise in solving the challenging issues of dense, outdoor networking. In fact, its stadium-caliber Wi-Fi solutions are used to empower businesses of all kinds to support more users and devices, more efficiently.

With the era of the autonomous enterprise upon us, enhancing experiences has never been more important. Today, people value desirable experiences over material goods. When attending a sporting event, staying at a hotel, shopping, or studying through college, consumers have high expectations, every little detail counts, from the look and feel to the features and benefits – Wi-Fi included.

If you turn on a light switch and it doesn’t work, it’s kind of shocking. You’re like, what in the world is going on here? Wi-Fi is expected to be equally dependable, along with the Ethernet back-end, all the way to the core. Reliability and stability are the pillars that hold up the user experience, and user experience is king.

The demand for 24/7 connectivity is only getting greater as digital transformation pervades every conceivable industry. The internet has shifted from a useful tool to a necessary integrated component of work and life. At home, if we want to order a pizza or can’t find time to go grocery shopping, the solution is a few finger swipes away. In the office, mobile devices, tablets, laptops, and more have been adopted by the masses and employees expect to be able to work anytime, anywhere.

One of the things I love most about the networking business is that it isn’t just about creating the next faster switch port or building a newer access point with the latest chipset – it’s about connecting things together and Wi-Fi is a driving force in initiatives like:

It’s clear that Wi-Fi today plays a critical role in our lives. Though the challenges vary slightly between industries, the outcome is the same: Wi-Fi has reached a pinnacle of critical importance—and the next iteration of Wi-Fi technology, Wi-Fi 6, will only continue to foster innovation and elevate human experiences.

Where Will Wi-Fi Go Next?

There’s been a lot of talk lately about the future of wireless technologies and whether or not Wi-Fi will be replaced. With the increasing interest in 5G and CBRS technologies, it’s no surprise this has come up.

So, is Wi-Fi done after 20 years? Not a chance, I don’t see an end in sight! Wi-Fi is a staple for enterprise connectivity, or as Claus Hetting of Wi-Fi NOW stated so well, “it is the Swiss Army knife of wireless communication, able to support almost any type of device, deployment, market or use case.” It is the default wireless technology in almost any device and no one is ready to change any time soon.

Wi-Fi also isn’t sitting still. The latest generation of Wi-Fi is High-Efficiency Wireless, or Wi-Fi 6 or 802.11ax. Where previous generations of Wi-Fi focused on a single device throughput, High-Efficiency Wireless is designed to get more out of the system, rather than a single client. The timing couldn’t be better, because most of the problems network OEMs and enterprises are running into today with Wi-Fi deployments are efficiency-related; an effect of relying on Wi-Fi 5, or 802.11ac. 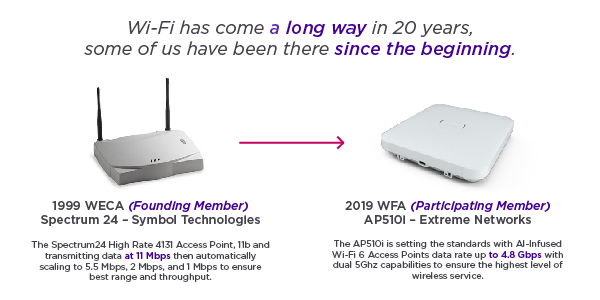 802.11ac is a solid Wi-Fi standard that has done its job well since its inception. 802.11ax is the next evolution of Wi-Fi, built on the same technologies, but with several variations, enhancements, and new features. 802.11ac certainly achieved performance improvements, with a theoretical maximum rate of 1.3Gbps.

With an exponentially increasing demand for efficiency gains, 802.11ax is designed to alleviate congestion in high-density environments, but it will also bring numerous other supportive benefits to the enterprise, from optimizing IoT deployments to increasing capacity for video-conferencing. Not to mention, it’s only going to continue to add connections around the globe and enhance human experiences.

It’s been an incredible 20 years for Wi-Fi so far, and I personally can’t wait to see what’s next. Here’s to another 20 innovative years!