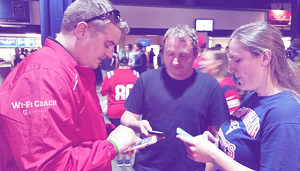 It’s game-day and you finally made it to see your favorite NFL team play.  You are a little annoyed by how long it is taking to upload pictures across your cellular provider’s network, but then someone informs you not only about the free high-performance Wi-Fi network, but the game day app that can enhance your experience while at the game. Now you are Snapchatting pictures and videos quickly, checking fantasy football stats, and watching exclusive video replays from the comfort of your seat.

So, what is an Extreme Networks Wi-Fi Coach™?

A Wi-Fi Coach is an individual that assists fans with the accessibility, usability, and reliability of a stadium’s large scale high-density wireless network and supports game day apps.

What is the purpose of the program?

To enhance the fan experience! It is incredibly important to stadiums, teams, and Extreme that a fans game day experience is positively memorable in every way – and network connectivity is key to ensuring this experience. A stadium could have the largest, fastest network with the best stadium applications, but support does not matter if the fans don’t know about it, why it exists, and how to connect to it.

The Wi-Fi Coaches are there to let fans know about the Wi-Fi and assist them in real-time to ensure their experience is the best possible. This in-stadium interaction between Wi-Fi coaches and fans is a great way to educate guests about the features and benefits offered with the in-stadium apps to further enhance their game-day experience.

What do Wi-Fi Coaches do? 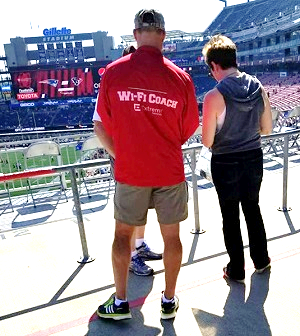 When did the program start?

How do the Wi-Fi Coaches operate?

The Wi-Fi Coaches are locally sourced and go through Extreme Networks’ Wi-Fi Coach Certification Training, over 500 Wi-Fi Coaches have been trained and certified league-wide. The Wi-Fi Coaches walk around stadiums educating fans about the free Wi-Fi available during a team’s home games.

The Wi-Fi Coaches can be seen before the game starts in concourse areas educating fans when they arrive at the stadium about the free Wi-Fi. After the game begins the Wi-Fi Coaches spread themselves across the stadium so that they are easily accessible by fans to answer questions.

One reason why the Wi-Fi Coaches have been incredibly successful on game day is because they are in constant communication with the stadium’s network operations center. Extreme Networks Director of Customer Success, Mike Lytle, says, “If an unexpected application or network problem arises, we don’t need to wait for the fans feedback the next day, the team will react and remediate immediately.”

The Heart of a Hall of Famer Program Introduces…
What It Took to Be Part of the Steel Curtain – Donnie Shell
How the Role of Data and Analytics in Baseball has Evolved and Changed
Discipline, Respect, and Perseverance – What Andre Reed has Learned About the Game
“It takes a village” – Will Shields Reveals His Keys to Success