What is CBRS Technology? Should I Care About It?

My last two blogs discussed what is considered the dominant wireless technologies for many years to come:

In this blog, I want to discuss a new wireless technology that is getting a lot of press lately, CBRS.

To learn more about anything discussed in this blog or my prior two, be sure to attend my upcoming webinar Wi-Fi 6, 5th Gen, CBRS Wireless Technologies Competitors, Collaboration, or Just Coexistence.

So, What is CBRS?

Growing up in the late 70s when you talked about a CB Radio, this was the first thing that came to mind:

Back then CB stood for Citizens Band, today CBRS stands for Citizen Broadband Radio Service and has little to do with the primary trucker communication medium of the last millennium.

I have a favorite Italian restaurant chain, I go there all the time, food is great, cell coverage is terrible, I bounce between 1 bar and no service.  Not going to get any better as the carriers aren’t adding a closer tower any time soon.

On the positive side, the restaurant just offered a new Wi-Fi service, however, you need to set up an account and when I tried I thought I was re-enlisting in the Air Force with all the questions they asked, need to be a better way.

How many times has the same thing happened to you in hotels, office buildings or even someone’s house? This is what CBRS is targeted to fix, the marketing message is ‘the simplicity of a Wi-Fi deployment with quality of service & performance offered by LTE.’

How Does CBRS Work?

CBRS devices can be deployed just as you would traditional Wi-Fi access points, (you may eventually use devices that support both Wi-Fi and CBRS) to provide the required coverage. The CBRS system will be required to be registered with a central database, the SAS mentioned above. The SAS will identify the location of the new CBRS system, its power levels and other nearby CBRS and other systems operating in the same spectrum. Once all the information is processed and potential for interference is avoided, the system becomes operational.

CBRS also supports a 3-tiered access for incumbent users (think military, satellite ground station, etc.), Priority Access License (PAL) obtained via spectrum auctions and  General Authorized Access (GAA for the rest of the users; it should be pretty easy to figure the priority levels of each.

Now you just need to find client devices that can take advantage of the available spectrum.

Where Did CBRS Come From, Is It a Brand New Technology?

The FCC formally established CBRS as a new publicly available transmission band in 2017, a process started in 2012. Other technologies similar in the way they may share spectrum include:

What About Standards and Certifications?

Obviously, the FCC will be involved and CBRS 3.5GHz operation is governed and codified in Part 96. CBRS Alliance – Per their website, “Support the common interests of members, implementers, and operators for the development, commercialization, and adoption of LTE solutions for the US 3.5 GHz Citizens Broadband Radio Service.”

So, How Does CBRS Compete, Support or Co-Exist with Wi-Fi and 5G, with Wi-Fi 6, or Does It?

Yes, no, maybe, we’ll see – tune in for the next blog to see how all three wireless technologies can play nice together.

Well, that about covers the intro into CBRS, in my next, we will try and wrap up all three technologies and how they may be leveraged in the future to design a single wireless infrastructure, or maybe not. If you missed any of my previous blog posts, read them now

Don’t miss out on my webinar! 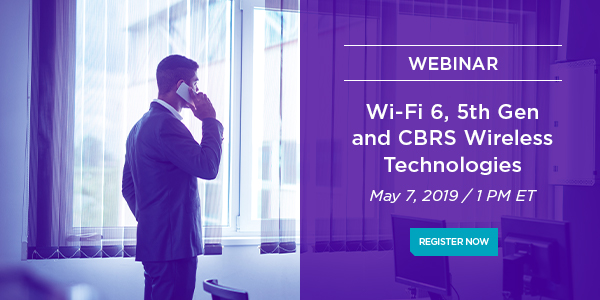