Video Cameras Are Coming To The Classroom 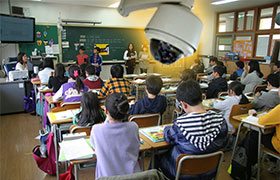 In October, 2012, Micah Watson, an 8-year-old with autism, came home from school with bruises. Micah’s parents suspected their son had been mistreated in a closet-sized “calm room” at Plano ISD’s Miller Elementary School, but were unable to learn more. Two years later, the child’s mother Bethany Watson was finally permitted to see video from that day, which showed Micah being forced into a tiny padded room at the elementary school in Texas. The door is held shut while the child yells, “No! No! Let me out now!” At one point the teacher eggs Micah on with, “Kick me. You’ve already done it. I don’t care.”  He knocks the student to the ground, attempting to remove the child’s shoes. The child begs to the teacher to let him out as the teacher responds, “No.”

This horrific incident led to important changes at Plano ISD and throughout the state of Texas. The teachers involved in the incident have been fired. All calm room spaces at Plano schools must now be at least 50 square feet and without doors.  This episode, combined with other similar high-profile occurrences across the state, led Texas to pass SB507 last year, requiring cameras in special education classrooms. Advocates of the law say the video cameras will go a long way in both easing parent concerns and in protecting teachers from wrongful accusations.

The topic of video cameras in the classroom has been brewing for years. Schools that have deployed cameras in public areas have experienced dramatic safety benefits. For example, Fraser Public Schools in Michigan found that the incidents of fighting dropped to near zero. Police officers have found body cams provide an important defense against false accusations. College professors are also eager for the protection that video surveillance can provide. In The Case for Class Cams, Amir Azarvan argues that “In an age of narcissism, we need to protect professors by putting cameras in the classroom.” According to False Accusations: A Growing Fear in the Classroom, “one in seven male teachers has been wrongly accused of inappropriate contact with students”.

Texas is far from the only state implementing video cameras in the classroom. Other states run the gamut of studying classroom surveillance, to drafting legislation, to fully implementing new laws on classroom video as Texas has done. Georgia’s new law, House Bill 614, also known as the Landon Dunson Act, enables video-monitoring camera equipment to be installed in special-education classes. Parents in Wyoming, Florida, and Ohio are currently working on passing laws to require videotaping.

At the federal level, both the House of Representatives and the Senate have been discussing the Keeping All Students Safe Act since 2011. The bill would establish federal minimum standards to limit the use of restraint and seclusion in schools. The bill currently stops short of requiring video in the classroom, but consideration could be added as debate over the bill progresses.

Benefits of Cameras in the Classroom

Certainly the most important benefit of recording classroom video is to protect student safety. But there are additional benefits for absent students, teacher-safety, and teacher-training. Teachers can learn from observing themselves and others in classroom situations. Absent students, unable to be present in the classroom can either participate remotely, or catch up afterwards. Handled as a learning tool, one teacher explains how video can be an important, constructive tool, even fostering collaboration within the teaching profession.

Faculty members are split in terms of their support for video in the classroom. Some like Amir Azarvan, assistant professor of political science at Georgia Gwinnett College, believe that cameras will protect faculty from students who might “deliberately misrepresent classroom confrontations and level false accusations.”

Parents have tended to be largely supportive of cameras in the classroom, as long as the privacy issues are well managed. As Kymberly Grosso says in Cameras In Classrooms? Bring It On!:

And if videotape monitoring is part of the job description, you as an individual, have the option to take the job or leave it.  But you do not get a say about whether the videotaping actually happens.  Employees, who work in all kinds of other industries, including government, are routinely videotaped, recorded, internet monitored, etc.  Why should education be any different?

Mark Powell, who is a professor at National University’s School of Teacher Education and has served as a teacher, vice principal and a dean of students with San Diego Unified School District has this to say in support of cameras in the classroom:

We use video cameras to protect our homes, our banks, our pets and even our grocery stores, but not our children — who spend over 35 hours a week in school classrooms. Cameras will protect the safety of both students and teachers. A video recording could be the one thing that saves a teacher’s job when there are false accusations of misbehavior, and could protect a student from a teacher who is abusing them verbally, emotionally or even physically.

Challenges with Video in the Classroom

The idea of placing video cameras in classrooms to record all teacher and student activities has not been met with universal acceptance. People have a natural instinct to distrust surveillance and to guard their privacy. School budgets are already over-extended without the additional costs for cameras, wiring, video storage, and oversight.

On the privacy front, the video data must be securely managed with tight access control. This is similar to other school data that is governed by the Family Educational Rights and Privacy Act (FERPA).

Offsetting the cost of the new hardware and software are expenses that are expected to drop off with the arrival of video recording. Those expenses include special education legal fees, lawsuits, settlement agreements, and staff time spent dealing with safety issues.

When the Bill Gates and the Gates Foundation proposed video as a means to help teachers gain feedback to improve their teaching skills (see Teachers Need Real Feedback TED talk), the idea was met with strong resistance by teachers concerned that the videos would be viewed out of context.

Where Can Cameras Be Deployed?

The new laws deal with cameras in classrooms and spaces used for students with special needs. The courts have ruled that cameras may not be used in an area where there is a “reasonable expectation of privacy.” These off-limits areas include bathrooms, gym locker and changing areas, and private offices (unless consent by the office owner is given). The US Department of Justice cautions that the presence of video cameras not lead a person to believe he or she will be rescued if attacked.

Planning For Video Cameras In The Classroom

Deploying video in the classroom must start with good planning. The plan should deal with the following considerations.

Networking. Will the cameras connect to wired Ethernet or Wi-Fi? Is there adequate bandwidth and security?

Video file storage. Will you use a dedicated video file system? How much file space is required? How long will the files be retained. How will you insure adequate security of the files? Will we use automatic computer analysis software? Who will be permitted to view the videos and how will this be managed?

Informing the faculty, students, and community. How the community is informed has been shown to have a dramatic impact on how the deployment is received. Is the plan to use the saved videos only if an issue comes up (on-demand), or will they be constantly reviewed?

The Vertical Tracks at Extreme Connect: Picking the Right Breakouts and Birds of a Feather Overview
With Extreme Fabric, Extreme Partner, STEPCG, Automated the Deployment of a Next-generation K-12 Network Four-times Faster
Compute Edge to Cloud for Smart Infrastructure
Reimagining The Education System With Enterprise-Level Networking
Kentucky CARES: Advancing Your SLED IT Strategy with Stimulus Funding