Early Use Cases Will Be Seen in Intent-Based Networking

Machine Learning (ML) has major applicability in IT automation, turning relevant data into actionable software, and it also can ensure optimal configuration in networking. Briefly, ML achieves this by analyzing the structure of collected data to find patterns you didn’t know were there.

What’s important to IT and data center networking is:

The answer to the first question is a definite Yes: There is already current research (as well as some concrete examples) in the use of neural networks to anticipate or counter DDoS or data exfiltration attacks.

To see where we might take this farther, even in the near term, consider the types of things that network engineers learn, even heuristically, and then consider whether they might be generalized and learned by an application. For instance, you might be able to identify combinations of conditions that contribute to congestion in the network:

Then you can anticipate and avert these delays before they happen again.

Ultimately, ML can be pivotal in the continuous correlation of network state, providing end-to-end and up-to-date models of traffic, topology and statistics for all interfaces. In the near term (next 12 months), this can help to fulfill the requirements of use cases needed for intent-based networking.

How Do We Get There from Here?

In constructing systems that can learn from data, ML methods are a bit different from traditional computer programming, as shown in Figure 1. 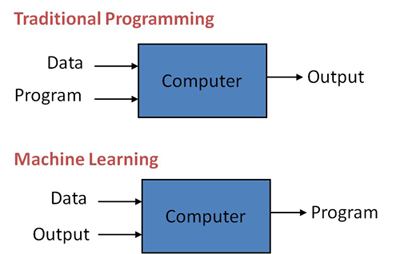 At a high level, you are mapping collected data to known, observed behavior (outputs), and producing software that models and predicts what you can expect from this. ML systems “train” themselves: they learn how to make inferences from new knowledge as they accumulate it.

Clearly, one the key drivers for successful ML is collected data from an active underlay, and networking is replete with this of course. The key is to find patterns in that data and understand it better so you can classify it in a meaningful way, and make inferences for better decisions.

But is Networking Data Ready to Support This?

Successes in ML have come in pattern recognition, natural language processing, and robotics, and working with standardized data sets has been a crucial factor in these advancements. With a labeled dataset (for instance, a carelessly scripted “4” is labelled “Four” so that related handwriting is recognized accordingly) you can embark on supervised learning.

And although we have all this data, most of what we collect (from SNMP, Syslogs, Netflow, and other mechanisms) is not only proprietary but very incomplete, often filled with spurious noise. These sources were not built for ML, so we’ll either need ways to standardize them or create new algorithms to deal with them (or both).

How Quickly will ML Advance in Data Center Networking?

In networking, we are only in the early stages of exploring ML, it’s still a great fit for transformative.  ML is a major leap beyond the slower pace of early-days protocol innovations (from hop counts to distance vectors and link states), predictable boosts in interface speeds, etc.

There’s a good bit of applied math involved, including linear algebra, probability theory and statistics, multivariate calculus and other specialized algorithms. However, network engineers need conceptual understanding rather than mastery, as much is already codified in software libraries such as TensorFlow, torch, or scikit. And objects in these libraries can be invoked from event-driven workflows in various programming languages, or in StackStorm.

With continued momentum, may skip the trough of despair on the Gartner hype cycle (Figure 2). 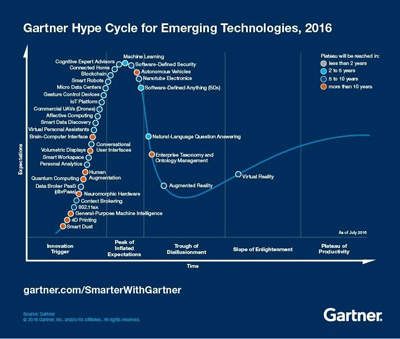 Figure 2: From Peak of Expectations, ML Could Advance to Slope of Enlightenment (Source: Gartner)

As network automation becomes more essential in the data center, and more reliant on the mountains of data that networks have always generated, formalized ways to analyze and predict behavior are increasingly being studied and applied. Inevitably we’ll see more accurate models built from visualizations gleaned from the underlay, figuring out the right level of abstraction to provision, secure, and operate networks.

Visibility innovations are driving intelligent automation in the data center, particularly in support of DevOps-style workflow automation such as Workflow Composer.

If you’re interested in learning more information on Machine Learning be sure to check out these links:

If you’d like to learn more about the Extreme Networks products that are discussed in this article, please view these resources:

Please reach out to your Extreme Networks sales representative for more information on any of our solutions.