Entering into the second half of the ’17 NFL season, the playoffs and Super Bowl LII are already on the horizon and quickly approaching, which incites memories of last year’s historic Super Bowl between the Atlanta Falcons and New England Patriots.

As the Official Wi-Fi and Wi-Fi Analytics Provider of Super Bowl LI, Extreme Networks measured key fan Wi-Fi usage and engagement metrics throughout last year’s Big Game.  It was fascinating to see how fan usage of social media apps changed throughout the course of the game.  Social media platforms are always at the top in terms of the most-engaged fan-facing apps in-stadium; what’s more interesting is visibility into exactly what social apps are used when – reviewing network trends when key moments in the game or event occur.

This approach delivers actionable intelligence related to fans’ social media preferences and behaviors, allowing digital marketing teams to be more targeted on where and when they invest in fan outreach efforts.  It goes without saying that these analytics truly validate the importance of high-density Wi-Fi networks in-stadium.  Would you want a poor Wi-Fi connection to be the one thing preventing a fan from sharing a memorable experience?  Certainly not.

Speaking of memorable experiences, the final two minutes of Super Bowl LI may have been the most exciting part of a game that already didn’t lack thrills.  The New England Patriots completed their historic comeback to tie the game at 28 to 28, forcing the first overtime game in Super Bowl history.  In order to visually document the power of Wi-Fi analytics to demonstrate fan engagement over social media, we overlaid how various social platforms – Facebook, Twitter, Instagram, and SnapChat – responded during the final two minutes of the game.  Check out the video below!

As the action unfolds on the field, the two charts pictured in the video demonstrate respective active users across the four social applications as well as the respective bandwidth those applications are consuming.  In this very specific sample, we can see fans prefer to use SnapChat and Facebook compared to Twitter and Instagram.  Given the circumstances, this make senses considering most of the social sharing is likely happening in a very quick or live manner; both SnapChat and Facebook allow users to share their experiences in real time.  Furthermore, the spike in bandwidth generated for both social platforms also makes sense: apps that support streaming video will consume more bandwidth across the network compared to a still image or a simple post.  These are just a few examples of the powerful insights Wi-Fi analytics delivers to a team.

To see a high-level overview of how fans utilized social media throughout Super Bowl LI, take a look at our Network Engagement Chart below, where we document the bandwidth consumed by key social apps during the course of the game.  We also identify key moments during the event, including the Super Bowl Halftime Show, where we see Lady Gaga once again stole the show! 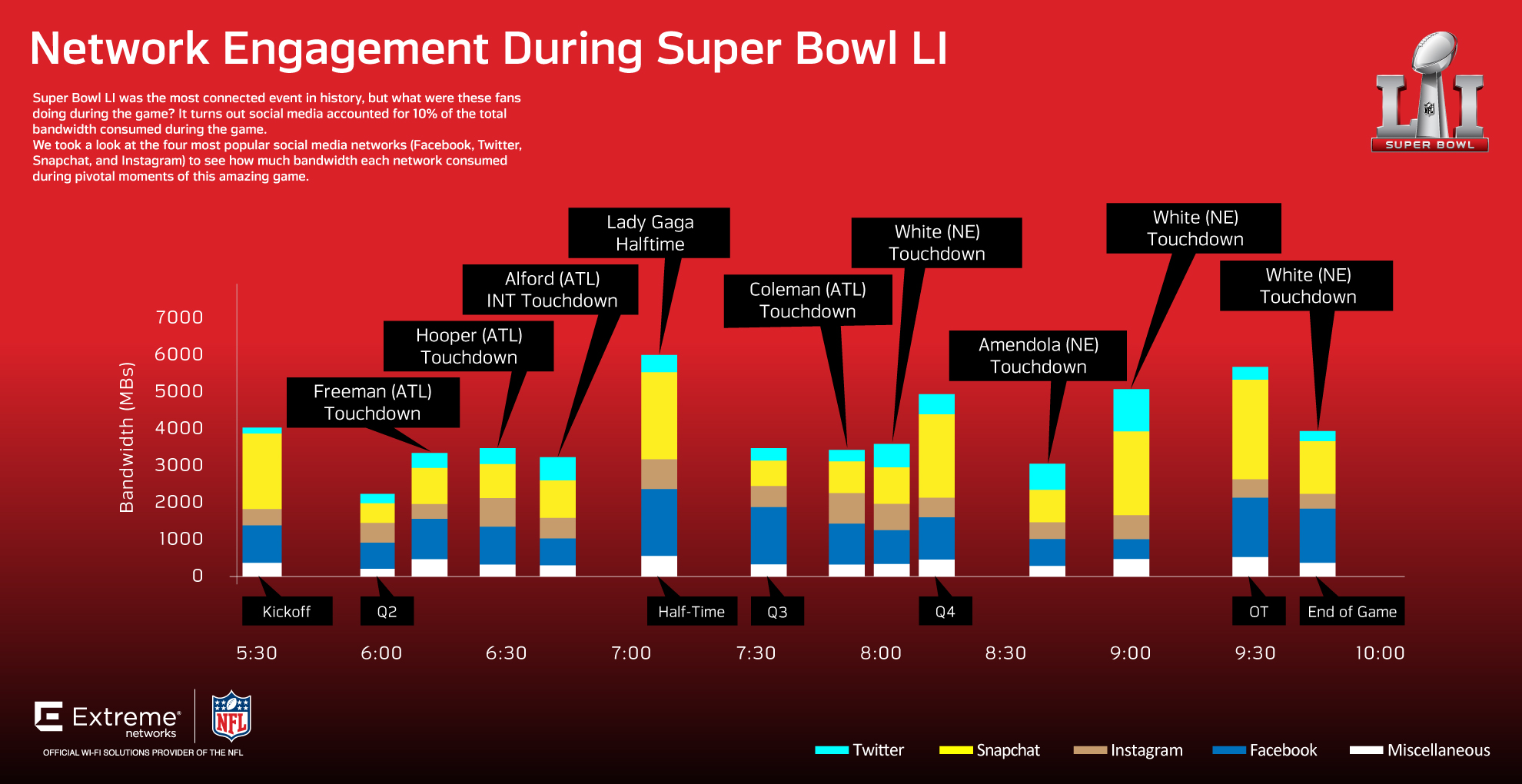 Want to learn more about the Extreme Networks and our work with the National Football League, check out the resources below!

Challenges and Digital Competencies Essential for the Future of Live Sports
Sports Innovation Lab: The Importance of “Connecting” for the Future of Live Sports
On and Off the Field, Pro Sports Steps Up to Help with Covid-19
Florida Gators and Extreme Networks: Creating a Winning In-Stadium Experience
Delivering a Championship-Caliber Wi-Fi Experience to UF’s ‘The Swamp’