Finding ways to enhance student outcomes, increase retention rates, and better engage students both on campus and off is top of mind for most higher education professionals, and drives the IT agenda.

With styles of learning evolving to include new technologies, there is an increased reliance on the network to operate flawlessly for both on and off campus students. Today, being able to connect to the classroom autonomously is the expectation of students, staff, parents, and guests. Besides those stakeholders, there are also the operational users who deploy devices like surveillance cameras and wireless door locks as well as IoT devices for HVAC optimization, and more.

Having a powerful and reliable network powering your higher education institution requires implementing the right elements, at the right time, in the right place.

SUNY Canton realized how the network could enable better student outcomes and experiences while also contributing to enhanced operational outcomes.

It was of the utmost importance to SUNY Canton to provide students with the best possible learning outcomes. Beyond that, the university saw an opportunity for the network to enhance their extracurricular activities as well. Canton needed to balance these opportunities with costs while also ensuring the network could scale to meet future growth demands. With 3,200 students on the Canton campus and 450 staff members, IT estimates that each person owns 4-5 devices that connect to the campus-wide network.

With high hopes for the institution and network, it became clear that a new solution was needed. After an evaluation, Canton selected Extreme Networks for their refresh. The new infrastructure now meets all of Canton’s requirements for high-performance wired and wireless access and is easily managed by one network manager without any unanticipated outages.

“Thanks to Extreme Networks, we’ve been able to maintain our staffing levels even through the upgrading process. We haven’t had to deal with any unanticipated outages or issues of any sort.” – Kyle Brown, Assistant VP for IT and the CIO 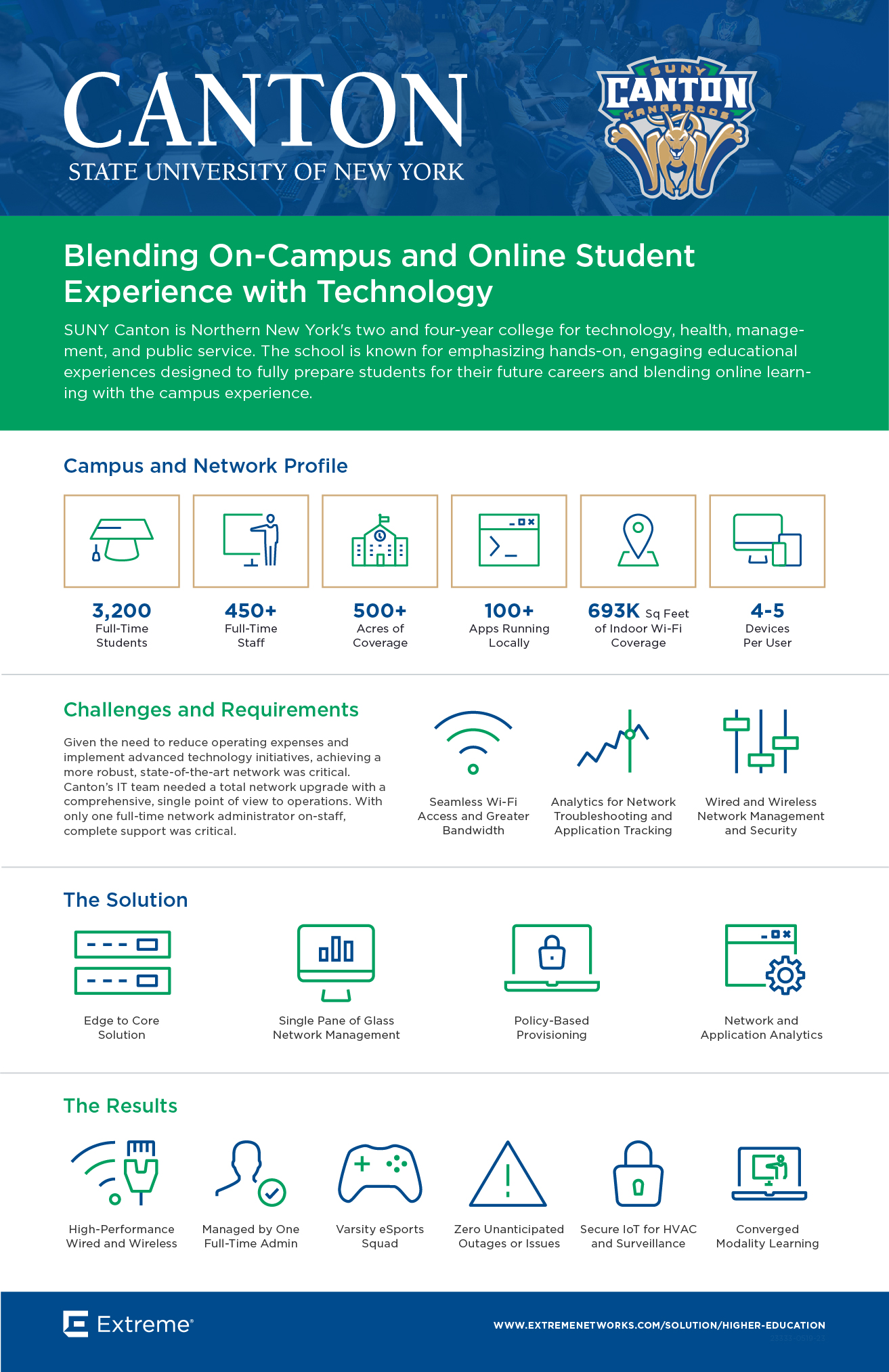 Canton has been a pioneer in the emerging field of intercollegiate eSports. They were the first school in New York State to join the National Association of Collegiate Esports (NACE). In addition to serving on-campus students, this program gives online students, who make up 41% of the student population, an opportunity to participate in school organizations.  The program now has a well-developed team and, since working with Extreme Networks, a technologically-advanced on-campus arena.

The eSports arena consists of

To ensure that each student and team can reach success, they need a strong and reliable network. SUNY Canton relies on Extreme Networks to get its network and students where they need to be.

According to Kyle Brown, assistant VP for IT and the CIO, one of the primary reasons that Canton decided to work with Extreme is because of the ease of use and support. Canton has only one network admin, and since using Extreme’s systems, “We haven’t had to add any additional staff, all while improving our infrastructure and future-proofing for upcoming initiatives,” says Brown.

Extreme Networks provides Canton with a high-speed Wi-Fi network, so their eSport arena runs smoothly without time delays, glitches, or long connection times. Extreme’s solutions for Canton include high-bandwidth, low-latency Wi-Fi and ExtremeSwitching for high-performance connectivity. Additionally, the deployment of Extreme Management Center and ExtremeControl make it easy to control and analyze network activity. Extreme Analytics is used at Canton to make sure that the bandwidth distribution is prioritized to the arena, especially during tournaments.

Campuses today rely on the fastest internet speeds, the most accurate bandwidth analytics, and the strongest network that can reliably reach every edge of the campus. Extreme Networks has made this a reality for SUNY Canton.