“How Pokémon Go sparked ‘miracle’ transformation in boy with autism”

“Why Pokémon Go really is a national health service”

These headlines and tweets reveal some of the drama unleashed onto the world when the Pokémon Go app was released on July 6th. The seemingly overnight success of the location-based augmented reality mobile game has roots going back 20 years. The key ingredients beyond the Pokémon characters themselves are Niantic’s mapping capabilities and augmented reality. For anyone who has missed it, the goal of the game is to catch and train monters called Pokémon and in so doing, become a Pokémon master.

Since the Pokémon are spread all over the countryside, players have to hike outdoors. They also collect extra bonuses at PokéStops, which are real-world landmarks. The game is so popular that Yelp now has a filter criterion to find restaurants with nearby PokéStops.

In addition to the health benefits of getting students up, about, and exploring the outdoors, Pokémon Go can help students understand the concepts involved in augmented reality; it can foster map and perimeter skills. It also provides an engaging way to learn more about local historical events, and it teaches kids the metric system.

The app can be used to build stories and instructional videos around; in other words to spark imagination for creative story telling. Similarly, the Pokémon journal can provide a data source for arithmetic practice or infographics. What’s the average number of Pokémon per area, or how many Pokémon show up in a certain period of time. Creatively applied, the app can get kids involved with fractions, percentages, and ratios.

One thing about blending games with learning is that it is an easy way to keep students involved during vacations and time off. Assignments that incorporate games like Pokémon Go will certainly make the time-off learning more engaging.

Minimizing the Risks and Dangers

All those benefits of course assume the game is played at the right times and in the right locations. How can you tell if students are trying to play when they shouldn’t be? If you have Extreme Networks Wi-Fi, your network manager can see if anyone is using Pokémon Go on the network (see figures below), and deny it if they are. Extreme Networks is even looking into a way to show where the PokéStops are within and around your premises. 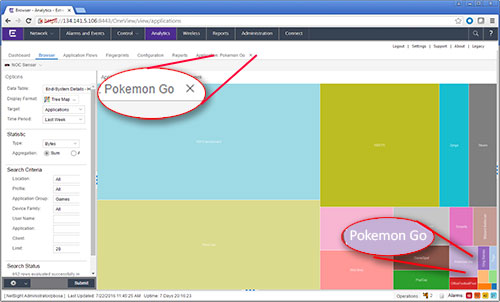 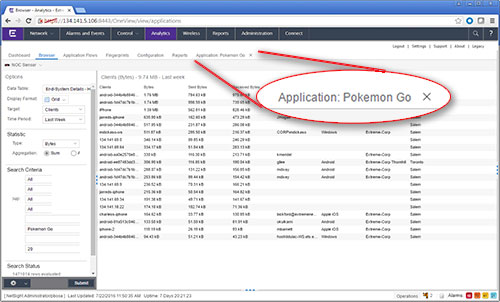 The two images above show how Pokémon usage and users are displayed on ExtremeWireless Networks.

Would you like to completely eliminate a PokéStop from your premises? Maybe there is a PokéStop in a dangerous location or an area where you need to minimize traffic. You can request that it be removed by Niantic. As for requesting new PokeStops, at the moment, the site says, “Please note, we are currently not accepting submissions for new PokéStops or Gyms.

Privacy is another concern with the game. The app requests permission to access things like your location, your email address, and IP address. There is a natural concern whether children truly understand what their consent to these requests means. Senator Al Franken of Minnesota has called on Niantic to explain what it does with the data.

The New York Times offers some advice about Pokémon Go security risks, including saying “no” if you are uncomfortable sharing personal information. Apps like this often use Facebook and Google for authentication, so keep an eye on your privacy and security settings within those programs.

The fact that the app opens with this warning, “Remember to be alert at all times. Stay aware of your surroundings” is one indication that there have been negative experiences with players becoming too enrapt in the game. Following good common sense will help kids avoid crashing into police cars and trees; and will help avoid cuts and bruises caused by stepping off curbs or into trees.

If you didn’t realize the impact that augmented reality and gaming are having on education, this may be a wake-up call. One of the biggest challenges to educators is getting students engaged. Pokémon demonstrates the engaging powers of augmented reality and how they can be applied directly to education. Here is more information on making the most of this. 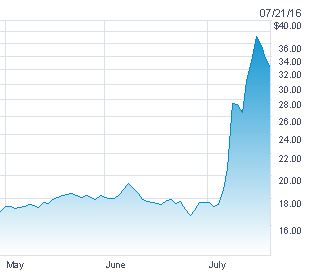 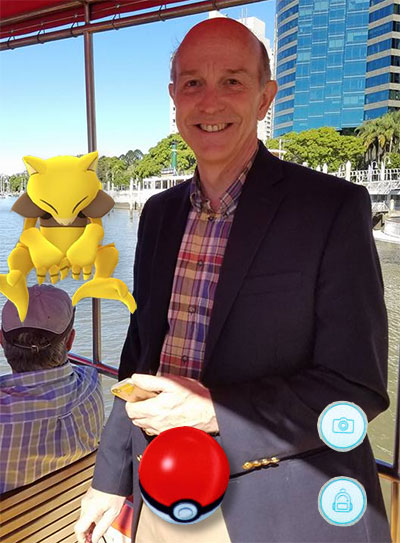 Above left: As an indicator of the attention Pokémon Go has been getting, the price of Nintendo stock (NTDOY) rose dramatically after the game’s release. Above right: The author performing serious research into Pokémon Go.

This blog was written by Bob Nilsson, with help from Scott Ferguson and Lisa Yeaton.