At Extreme, Diane Cramer is in HR & focuses on talent development. She is known for her skill in designing new programs and organizing events to help employees connect with each other and succeed in their roles. She has an eye for identifying processes that need to be improved and creating beneficial employee programs. Diane says of her experiences at Extreme, “I am always busy creating, developing, learning, and I find that so fulfilling.” See how Diane advances with us!

What is your background before you came to Extreme?

I went to college for speech pathology and audiology. I originally wanted to become an audiologist at a hearing-impaired school. I later pivoted and started working for a hearing aid manufacturing company as a technical trainer. After a while, I realized that I didn’t love hearing aids, but I was passionate about training and people. That’s what started me on the path to getting involved with human resources and becoming a learning and development professional. Twenty years later, and I ended up at Aerohive Networks in HR and joined Extreme when we were acquired.

What drew you to Aerohive and later Extreme? What makes you stay?

I started at Extreme because my VP from a previous company joined Aerohive and I followed her. I am so glad that I did because I have really enjoyed my time at both Aerohive and now Extreme! My HR Leader challenges and motivates me to think about the possibilities, not the limits, like “what should we do to drive employee engagement and productivity?” As long as my job has a positive impact on those around me, I will always be happy with what I am doing.

What is your favorite memory from your career?

During the Aerohive days we used to go all out for Halloween in the office. The head of HR did not encourage individual Halloween costumes, you had to do it as a team and match costumes with your cubicle mates, your department, or just some other coworkers. It was so fun and while it didn’t catch on immediately, by the third or so year, if you weren’t dressing up you were the outcast in the room! The costumes were awesome too; we had Harry Potter, A League of Their Own, Snow White and the 7 Dwarves. Imagine engineers costumed as Gnomeo and Juliet! It was so much fun to see how creative everyone got with their costumes. 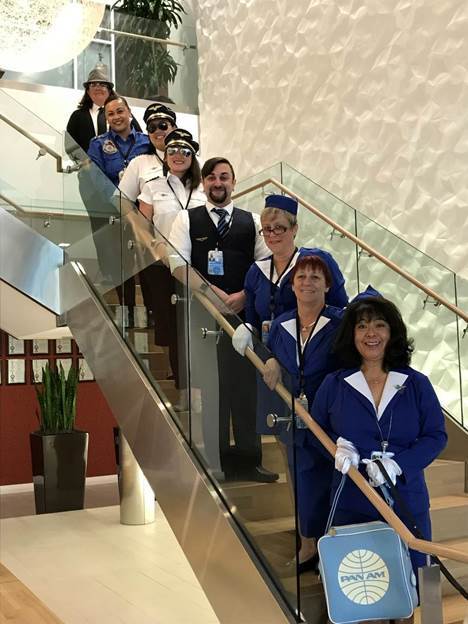 [One year, Diane and her teammates dressed up as the PAN AM flight attendants from Catch Me If You Can.]

What advice do you have for colleagues or college-graduates pursuing a job similar to yours?

Be open to new possibilities. If someone gives you an opportunity, you should jump on it and just try it out. Don’t worry so much about what your degree is in. Things change, and you need to find what makes you happy even if it isn’t what you originally thought it would be. I love this quote I heard on American Idol from Lionel Richie – he said, “Life begins at the edge of your comfort zone, and every time you become afraid take a step forward.” I truly believe this and that’s why my advice is don’t be afraid to try things out. You never know, you might end up loving it!

What do you like to do outside of work?

My new favorite activity is pickleball. It’s a game you play on a modified tennis court, so the court is a little smaller and the net is lower, and you play with a paddle. The paddle is like a giant ping pong paddle and you use a wiffleball. It is really fast paced but doesn’t require as much running as tennis. I also love to golf. I actually have a hole in one! 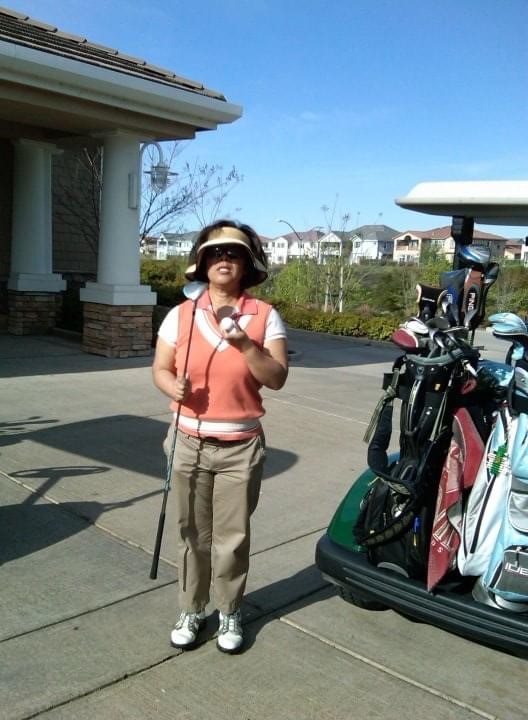 What is your favorite place in the world and why?

Where I live – Angeles Camp! It is about 120 miles east of San Francisco along the Sierra foothills below the snowline. It’s between Lake Tahoe and Yosemite and it is beautiful. It is a nice country-style area and it is so peaceful. The people here are great, and it is such a fun place to be. I am so grateful to have the opportunity to live around here. That was the positive side of life during COVID for me, I got to work from this beautiful place!

That being said if I could travel anywhere, it would definitely be Italy!

What is a fun fact about you?

I am a huge San Jose Sharks Ice Hockey fan. I hope that someday I will get to attend one of their games in person again soon, as I have several fun stories from games I’ve attended! Two days before my stepson’s wedding, my husband and I went to a game and the puck went over the protective netting through a small opening. I ducked but it still grazed the side of my head and ended up hitting my husband in the lip. He had to get stitches, his on both the inside and outside of his lip. I had to ask the doctor to do an extra good job with the stitches since we had wedding photos in only a few days’ time. Needless to say, we became the talk of the whole emergency room!

Join Diane and the rest of the team!

Visit our careers page to explore opportunities in sales as well as the many other roles in which you can advance and help Extreme drive effortless networking experiences for enterprises worldwide.

Wireless Security in a 6 GHz Wi-Fi 6E World
5G Orientation – a Video Summary
The Stadium Network: A Microcosm of the World
Extreme Customer Sends Packets Flying Through 6 GHz Space
Rock and Rolling with the Giants. An Interview with Extreme Hero Alberto Guerrero.