Have You Deployed Virtual Reality in Your Classroom… Yet? 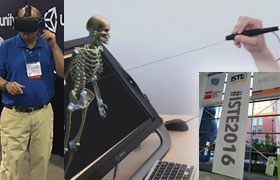 Judging by the number of ISTE 2016 sessions and posters on the topic of virtual reality, the technology is fast picking up steam or STEAM. During the Virtual Reality: Blend This Into Your Learning panel, blogger Richard Byrne, teacher Ben Lloyd, Jan Stahlberg, and TV science personality Nick Uhas discussed the benefits of VR for teaching and gave advice on how to get started.

The panel began by reiterating the benefits of VR in the classroom. It solves a student engagement challenge. It can often be much safer than real science, but with the same learning impact. Several panelists have found that VR brings out the awe, beauty, and emotions of science. “Our students are now so motivated, they come to school early and stay late,” summed up Ben Lloyd.

How To Build Support for Virtual Reality And Get Started

Several of the audience members wondered how to get a VR program started in their schools. Indeed one survey found that while the vast majority of teachers believe VR is an important technology for teaching, only 36% believe they will be able to implement it within five years and 28% think their school will never make use of VR.

In fact, VR is not an expensive technology requiring a large budget. Google Cardboard is less than $15, without the smartphone. Jan Stahlberg initiated a program in his school with a budget of $700, which was funded through donors. Some school districts have asked that obsolescent smart phones be donated for use with school VR.

It’s important to get key budget decision makers involved. Experience says that once they have tried full-immersion VR, they become convinced of its value and funding is no longer an issue. No matter how the program gets started, be sure to make it a regular part of the curriculum. VR content exists for almost all subjects. Many schools get the students involve in creating new VR content.

Take our virtual reality survey – it’s not too late to be entered into our drawing for Google Cardboard.

In addition to the sessions and presentations on VR for teaching, poster sessions included Breaking out of the Norm With Virtual Reality, Virtual Reality: Blend This Into Your Learning, and Practical Applications of Augmented Reality in a 1:1 Classroom

A suggestion from Can K-12 Procurement Change To Keep Pace With Innovation, is to put your budget in terms of cost per student. People will see that on a per student basis, the cost is much less than families typically spend on cable TV or home Internet.

When purchasing hardware, schools want to build a partnership with the vendor. That is less the case for software purchases. The request to software vendors to be careful with the freemium model, which is starting to cause a big problem. Software vendors are selling directly to teachers and they are not always sure what happens with the student data stored in the cloud. Vendors need to show how they protect the privacy of student data.

Do testimonials help with procurements? The short answer is yes. NYC would not have made a major procurement of Chromebooks without the supporting testimonial of Chicago. Peer suggestions and recommendations never hurt and can sometimes make a vital difference,