David Coleman Director, Wireless Networking at the Office of the CTO Published 25 Mar 2020

You should always remember that the fast-paced feature velocity in the cloud comes in phases. Last month, we debuted the first phase of the Network Topology view in ExtremeCloud™ IQ. This new monitoring view gives you top-to-bottom and vice-versa perspectives of all your networking devices. One month later, the next phase of network topology enhancements is now available. An administrator now has a visual view of information concerning the wired connection between any two networking devices. As shown in Figure 1, a cursor rights-click on the line between an AP and a switch displays data about the wired connection. 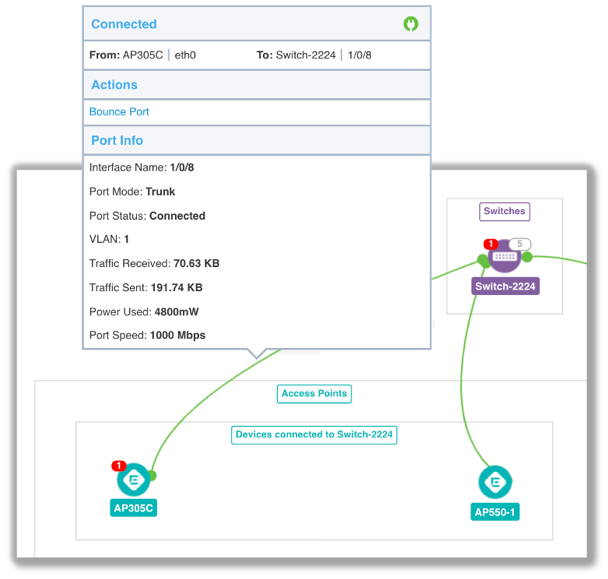 For example, traffic throughput, power consumption, connection status, and physical port information all display immediately. Last month, we also added the ability to bounce a port on any switch monitored in ExtremeCloud™ IQ via Device 360 view. The bounce briefly turns off the PoE power and turns it right back on. Power-cycling is an old network administrator trick to force an AP to reboot. The PoE bounce capability is now also available from the network topology view.

Components of network topology are now also found within other monitoring perspectives of ExtremeCloud™ IQ. Client 360 view has always offered a wealth of real-time and historical information about any wireless client device. As shown in Figure 2, Client 360 view now presents a visual perspective of the client within the network topology. This example displays a high-level view of my iPhone connected to an AP130, connected via Ethernet to an XR600P branch router at my house.

Additionally, Device 360 view has always offered a wealth of real-time and historical information about networking hardware such as APs or switches. As shown in Figure 3, Device 360 view now also presents a high-level visual perspective of the selected hardware within the topology. In this example, the network topology view starts from the selected AP130.

So far, I have focused on monitoring enhancements; however, configuration capabilities have also improved. The Radio Profile is a configuration object that defines basic and advanced settings for the Wi-Fi radio interfaces of any access point. As shown in Figure 4, you notice that the slider bars within the Radio Profile have been replaced. For example, the supported radio modes are now a drop-down box. While this might seem minor, this change is a direct result of feedback from our customers. Our goal is always to simplify configuration. 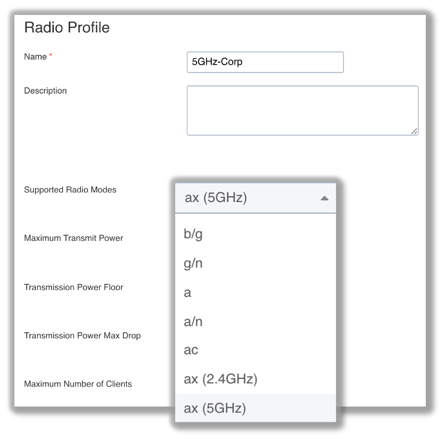 We have also moved multiple radio settings from AP Device Templates into the Radio Profile object. As shown in Figure 5, all channel settings and power settings have migrated into the radio profile objects where they logically belong. 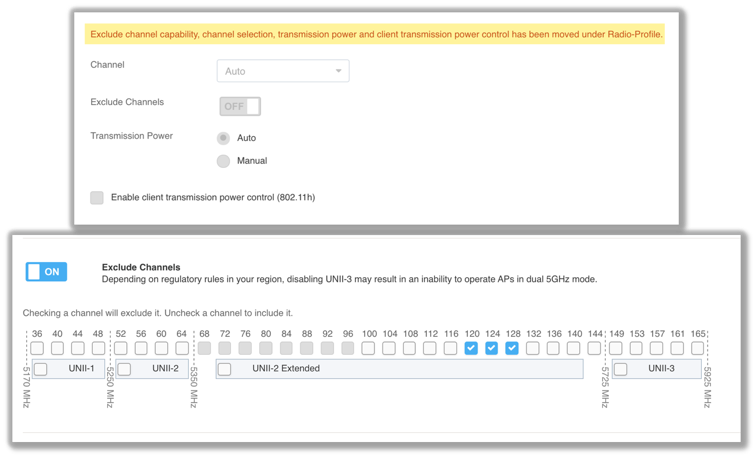 For instance, within a 5 GHz radio profile, an administrator can exclude selected channels from any automated channel selection plan. An admin might exclude channels 120-128 because of dynamic frequency selection (DFS) events as a result of detected radar pulses. While these channel and power configuration capabilities have always been available, moving them to radio profiles makes configuration more flexible for network administrators, and globally scalable when combined with Cloud Configuration Groups. Figure 6 displays the relationship between radio interfaces and many of the objects mentioned in this blog. 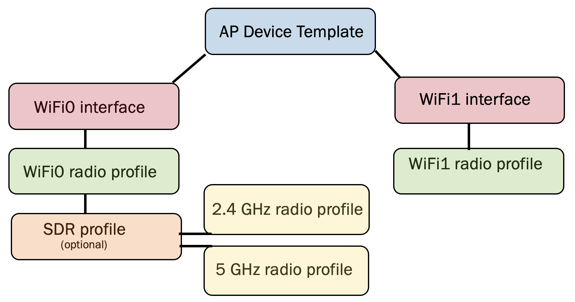 When a network administrator onboards a new AP or switch into the database of their ExtremeCloud™ IQ account, they might forget to complete the necessary deployment tasks. As shown in Figure 7, from Manage > Devices, a friendly reminder is displayed to prompt an administrator to link the network device to a location floorplan and also assign the device to a pre-existing configuration network policy.

There are also many new minor cosmetic changes in the graphical user interface (GUI) of ExtremeCloud™ IQ. As shown in Figure 8, Status Cards have a new streamlined look and feel.  The status cards are now easier to navigate and include more information along with hyperlinks.

Finally, the latest update to ExtremeCloud™ IQ now supports version 10.1r2a of IQ Engine firmware for the AP305C/CX and AP410C access points. Do you want to learn more about all the new bells and whistles in this March/2020 update of ExtremeCloud™ IQ?  Take a moment to watch this video as Erika Bagby takes you through a short tour of the recent enhancements:


While my blogging cadence is nowhere near as fast as cloud-speed innovation, I promise to continue to highlight new ExtremeCloud™ IQ capabilities at least once a month in future blogs.