Chip Suttles is the VP of Technology for the Seattle Seahawks, part of the National League Football. The Seahawks’ home field is CenturyLink Field in Seattle — known to be one of the more intimidating venues to play at in the NFL. Chip oversees all technology strategy and execution for CenturyLink Field, which is the third busiest stadium in the NFL and also home to Major League Soccer’s Seattle Sounders FC, as well as host to 300 event days per year including concerts, flat/exhibition shows, and large-scale corporate events.

As part of our Game Day is Everyday series, I chatted with Chip about his unique technology goals and challenges, and how his IT solutions are an integral part of his game day playbook.

Kicking things off here, can you give us an overview of your game day environment and game day responsibilities?

CenturyLink Field is an open-air stadium, with a capacity of around 69,000. Beyond just Seahawks games, if you add in the Sounders and the 300 plus event days we host a year, we see upwards of 2.5 million guests coming through our building on an annual basis.

I oversee all technology for the Seahawks and CenturyLink Field, alongside our Director of Digital and Emerging Technologies. I’m responsible for the Seahawks mobile app platform and all the features and functionality of our mobile app.  I’ve been with the team for eight years. I’m in charge of all technical operations – which essentially means anything that makes noise or lights up at the stadium falls under my realm. From the broadcasters to LED, audio, point of sales systems, and more.

When you were first brought on as VP of Technology, what were some of your first technology projects?

When I was first hired one of the first things that I was asked to address was connectivity. We had the inability to make a single phone call; it was a challenge for guests to even send a text message. We needed to address that right away. This was seven or eight years ago.

We put in a DAS system, but I knew that that wasn’t going to be enough. To complement it, we needed a strong Wi-Fi partner. I looked at the best in class in the marketplace and came across Extreme Networks. With that discovery, I took that to Verizon. With Verizon and CenturyLink’s help, the three companies bounded together and five years ago we installed one of the best Wi-Fi deployments in the country, in support of our fans and all guests who visit CenturyLink Field. 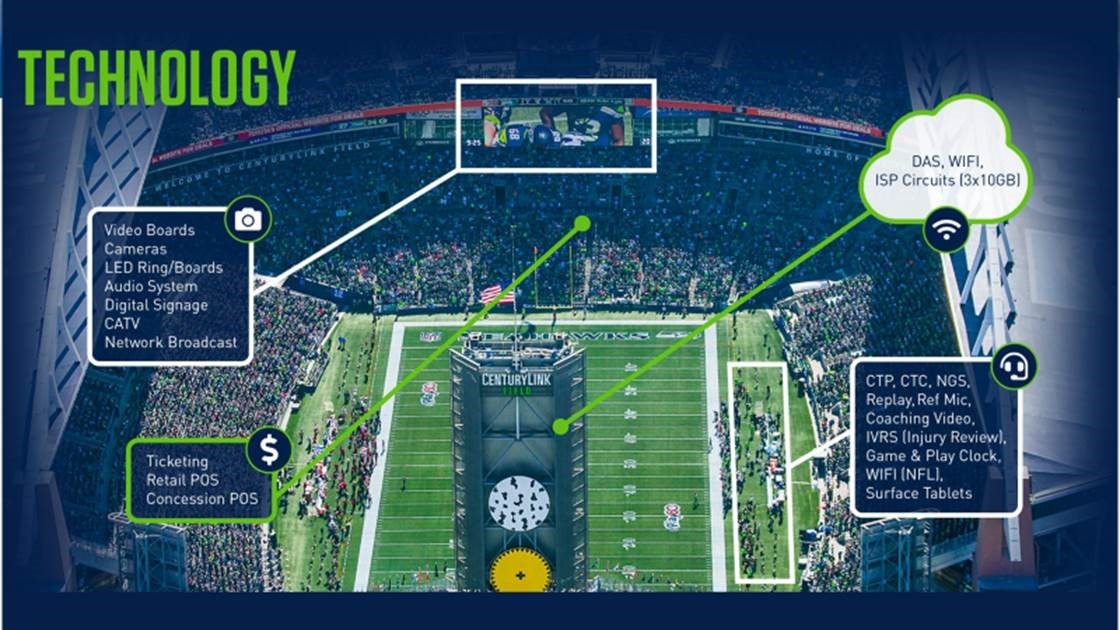 Was this Wi-Fi network well-received, and have you seen Wi-Fi adoption and usage grown?

We certainly have. Seattle has always been a tech-savvy market where we saw early adoption, but what we’ve seen really is the amount of data transferred increasing steadily kind of in a hockey stick motion. It’s going steadily as the streaming capabilities and more functions and features come available on mobile devices. They’re reliant on having strong connectivity and we continue to see that. We’re up to four and a half, five terabytes of data transfer per game; when we started, we were at two, two and a half. I expect that to double when we eventually upgrade our network to the latest standard, Wi-Fi 6.

We felt like it [the network] has performed as we had hoped to-date. We saw 35/40% average concurrent Wi-Fi users, which equates to about 25/26 thousand people at any given time. It’s pushing our design as we planned. In terms of the average concurrent use rate, we should probably be around 50% but hopefully, it’s going to be just a much better experience. The quality of the experience is going to be better allowing more people to access and stay on the network for longer periods of time. Then giving us an opportunity to add some more of these features to our mobile app.

Excellent! Sounds like a well-thought-out plan. Outside of your network refresh, what other technology or IT game day challenges have you and your team run into?

One of the biggest challenges for us had been connectivity, in the past. I think we resolved that when we put in a new DAS and new Wi-Fi, but two of the new biggest challenges to us is the evolution of the mobile ticket. With TicketMaster being the sponsor for the NFL and the ticket provider, this year they’ve gone 100% tickets and it causes a challenge. Now, we need to (digitally) pick up fans as they step on the sidewalk, so that you can pull up the ticket appropriately and have all their digital information – whether that’s the transferred tickets, reference the older tickets, or look at their account.

Another one is the evolution of the mobile app as the platform to engage with our fan base. This is both true for the Seahawks as well as Sounders. When I started seven/eight years ago, the majority of the content was taken via the websites. The news, the stats, videos, pictures, roster information, game day feed. Information is now centrally available through the mobile app. We’re happy to look at what we can do to enhance that game day experience by adding new features every year for our fans. A lot of that dependency is having strong connectivity.

On that note, can you give an example of a new game day initiative you’ve undertaken this year – specific to the app and/or otherwise?

Ultimately for us is we’re trying to customize the environment. This year we added some features that allowed you to designate whether you’re attending the game or whether you’re at home watching a game and then based on your selection, we offer different sets of information to you via the mobile app. We also expanded our in-seat food ordering while you’re at the stadium on game day. Expanded that footprint down to our premium field-level seats and allow people to order when they’re having premium experience along with our club patrons, our most valued customers. Now we moved that down to the field level and that’s been a pretty big success for us as well.

One of the other things that we’ve been able to do this season is partner with new partners. Clear is one, for example, is one that we’re utilizing. Clear is a biometrics identification tool that we’re using for both entry into the stadium, but we’re also using it as a point of sales payment and age verification. It’s network dependent. We have to be flexible to be able to put these locations around our stadium but utilizing a strong Wi-Fi network gives us that flexibility. So, last year we started with four [Clear] point of sales.  Another is the continuing partnership with Verizon has made the Seahawks one of a handful of franchises that are 5G early adopters. This year, the stadium will include eight 5G antennas throughout front and back of house, we feel that a great fan experience starts with connectivity and this is offering we are proud to provide to our fans.

Want to learn more about how Chip and his team ‘Surprise and Delight’ Seahawk fans with technology? Be sure to check out our blog post!

For more information on how the NFL and its clubs leverage networking solutions, visit our NFL Partnership page.

Challenges and Digital Competencies Essential for the Future of Live Sports
Sports Innovation Lab: The Importance of “Connecting” for the Future of Live Sports
On and Off the Field, Pro Sports Steps Up to Help with Covid-19
Florida Gators and Extreme Networks: Creating a Winning In-Stadium Experience
Delivering a Championship-Caliber Wi-Fi Experience to UF’s ‘The Swamp’