After a hard-fought match-up that the Student Wi-Fi Coaches accurately predicted, the Kansas City Chiefs are Super Bowl Champions for the first time in 50 years, and Head Coach Andy Reid won his first Lombardi Trophy.

It was quite an accomplishment for Reid and the Chiefs, but they weren’t the only winners on Super Bowl Sunday – the NFL fans at Hard Rock Stadium in Miami had a record-breaking night of their own. Fans transferred over 26.42 TB of data over the stadium Wi-Fi network, that’s the most of any Super Bowl to date!

As the Official Wi-Fi Network Solutions Provider and Wi-Fi Analytics Provider of Super Bowl LIV, our wireless solutions were deployed throughout Hard Rock Stadium to power the game and connect fans beyond the stadium. Besides our Wi-Fi analytics solutions monitoring network and application performance, we also had another tool in place at the Super Bowl to collect real-time fan feedback on the network, the Super Bowl LIV Wi-Fi Coach Team. 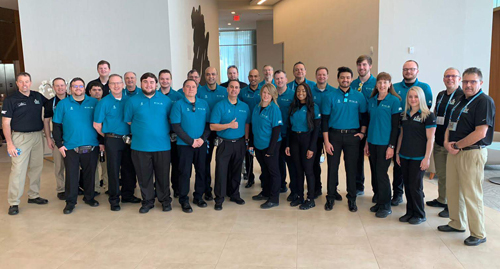 We recruited our most elite Wi-Fi Coaches from across the country to educate fans and assist them with Wi-Fi during the big game. Four of those Wi-Fi Coaches were CIS students from West Texas A&M University.

“We helped over 44,000 fans connect to Wi-Fi with over 26TB of data transferred throughout the event.” – AJ Jagdale, WTAMU Student 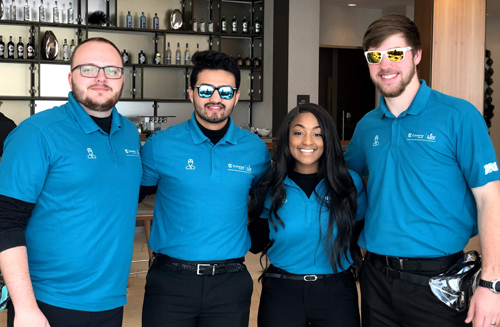 Have you ever wondered what it’s like to attend the largest and most significant NFL game of the year?

I had the pleasure of speaking with the student Wi-Fi Coaches about their expectations before the big game as well as what the experience was really like after they returned to their dorm rooms and had a moment to debrief. Here are their thoughts on what it’s like to go to the Super Bowl:

“It is one of the most amazing experiences to be able to help users on such a large scale.” – AJ Jagdale, WTAMU Student

“I’ve never even imagined being a part of something like this, and the fact that my team and I were able to go as college students was really impactful for us. The Super Bowl experience was awesome.” – Tina Ward, WTAMU Student

“I really enjoyed testing the Wi-Fi and see what it was like compared to what we have at Buffalo Stadium.” – Beau Robbins, WTAMU Student

“The stakes are a lot higher, and so it’s a lot, it’s just interesting to see how that operates in plays out.” – Matt Webb, WTAMU Student

[Behind the scenes: while on a quick break, AJ and Matt got their pictures taken with a fan who had a 1969 Kansas City Chiefs Super Bowl Ring.]

What was your favorite moment from SBLIV?

AJ: I loved the main event a lot! Getting to help thousands of people was incredible – seeing them light up after we informed them about the high-speed Wi-Fi and then wanting to connect was amazing. Also, it’s hard not to mention this, meeting the rest of the fantastic Wi-Fi Coach team, and getting to know everyone was hands down the best!

Beau: The excitement. I mean, the fact that we were at the most publicized event in the U.S. and just got to work with amazing people was great.

Tina: Getting to go to the Super Bowl in the first place! But, the fact that we were able to get a glimpse of a network of that size – seeing all the APS, testing the connection, and then meeting some pretty influential people along the way was awesome.

Matt: Meeting all the people that came from all over Extreme and customer sites to join the Wi-Fi Coach team. Getting to meet people that I usually would never have had the opportunity to meet was really cool. 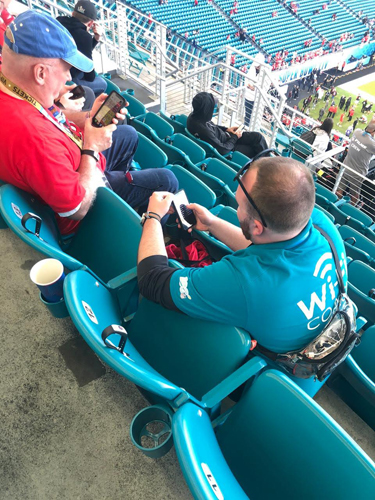 [Matt helps a fan connect to the stadium Wi-Fi network]

How was the Super Bowl Wi-Fi Coaching different than at WTAMU?

AJ: SBLIV Wi-Fi Coaching was different from my experience at WTAMU’s Buffalo Stadium because of the number of additional users – it was mind-boggling! 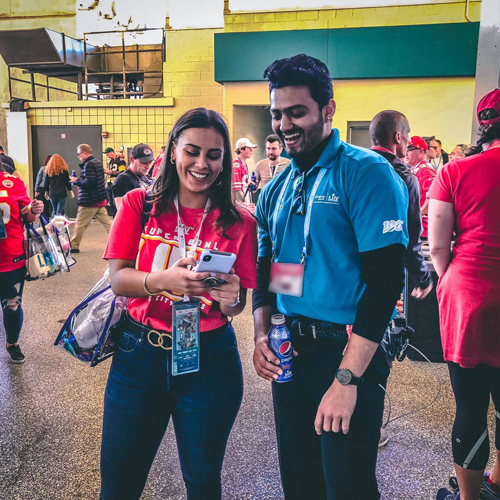 [AJ informs a fan about the free Wi-Fi]

Tina: The Super Bowl experience taught me that there was actually a lot I didn’t know about troubleshooting because I hadn’t experienced it. At the Super Bowl, there’s more people and more devices – older phones specifically, and that wasn’t something we saw a lot of at WTAMU. There were also a lot of hot spots popping up, which I hadn’t seen before.

Matt: There was a lot more at stake. If we have a brief downtime of a couple of minutes at Buffalo Stadium, it’s no big deal. At the Super Bowl, there can be no downtime at all. Broadcasts and more cannot be interrupted on game day.

How did the skills you learned over the past season prepare you for the Super Bowl?

AJ: By talking to all kinds of users at WTAMU this season, I had an idea as to how different groups of fans need to be approached, and that definitely prepared me for the Super Bowl.

Beau: Over the season, we worked with numerous people and got the opportunity to learn how to troubleshoot. That experience helped me when coming across certain users having issues at the Super Bowl, just like knowing what to do in a situation like that. 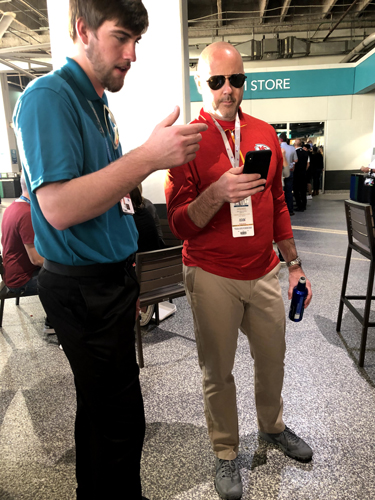 Tina: The customer service aspect of it. Overall, I wasn’t as nervous when we actually got to the Super Bowl because we had already been working with fans all season at WTAMU.

Matt: Learning how to talk to strangers. The WTAMU season helped me get out of my comfort zone and gave me the courage to go up to random people and talk to them about the Wi-Fi.

Did anything surprise you about the Super Bowl experience?

AJ: The number of people connected to the network, and the amount of data transferred was astonishing to me, like never seen or heard before!

Beau: It felt super-fast for me. But by the end of the day, I had 30,000 steps according to my watch. I couldn’t even believe it had been that much walking around. The day just flew by.

Tina: The size of the event, from the stadium to the network to the sheer number of fans and devices. It was an even more amazing learning experience than I could have expected.

Matt: Security. I was expecting there to be a lot of security, but I thought it would take longer to drive to the stadium than to make it through security checks. I didn’t expect that level of detail and security at the event, but I’m glad there was, I felt safe.

What recommendations do you have for future Wi-Fi Coaches?

AJ: Don’t be afraid to engage in conversations with fans! After you explain to them the benefits and quality of the network, they will most certainly want to connect to it. Also, pay close attention during training and be prepared to walk during the Super Bowl!

Beau: Always be prepared to troubleshoot. Also, enjoy the experience and live in the moment every chance you get.

Tina: Understand both the customer service aspect of things as well as the technological side. It’s one thing to know the technology and another to be good with people and able to explain things to them that they don’t understand.

Matt: If you are planning on going to the Super Bowl, invest in a very, very reliable pair of shoes, so your feet don’t end up killing you.

Another Super Bowl success! That’s it for this season for the Wi-Fi Coaches. Be sure to keep your eyes peeled for Wi-Fi Coaches next season at NFL and collegiate stadiums across the country. 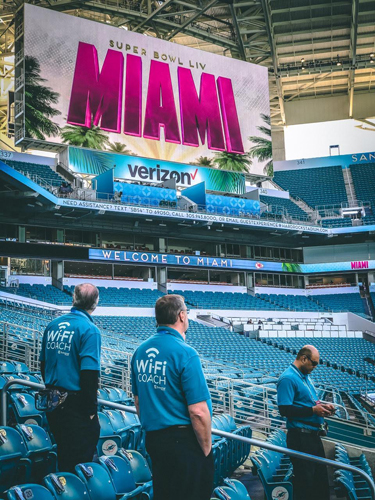