4 Cool NFL Digital Trends to Watch for Next Season

While a majority of the world is stuck inside and (hopefully) practicing social distancing, we’re inevitably missing out on many of the staples we previously enjoyed – like live sports.  To temporarily fill the void, here are some of the coolest digital trends that caught my eye from last NFL season, and what I’m excited to see continue entering next fall.

Across all industries, virtual reality and augmented reality technologies continue to inspire intrigue, for their potential to deliver immersive and engaging experiences to customers.  In short, augmented reality adds digital elements to a live view, where’s virtual reality implies a complete immersion experience apart from the physical world.  Even though AR and VR have been in existence for a few years, NFL teams and their stadiums are just now developing strong use cases for the technologies.  The ’19 – ’20 NFL season demonstrated this trend.

Perhaps one of the coolest digital use cases from last season was conceived and delivered by the Baltimore Ravens.  During the course of a live Thursday Night Football game at their home field, M&T Bank Stadium, in-venue Ravens fans looked to the Raven’s jumbotrons to periodically see a massive black raven flying overhead and interacting with physical aspects of the stadium.  The video below shows one appearance of the mixed-reality Raven, and what it looked like on the stadium’s jumbotron.

According to Jay O’Brien, Baltimore Raven’s VP of Broadcasting, the raven made nine total appearances during the game at different moments.  O’Brien spear-headed the project alongside technology partner, The Famous Group, as a way to continue to deliver unique and enhanced game day experiences to Ravens fans.  O’Brien added “We’re fortunate that our team and the entire Ravens organization believe in pushing innovation, and keeping our dedicated fans top of mind in these efforts.”  It sounds like additional mixed reality applications are being explored for next season.  The Ravens’ game day experience is already ranked among the best in the League, so it’s safe to say Ravens’ fans are responding in a very positive way.

To see another cool augmented reality use case from this season, check out the Dallas Cowboys’ ‘Pose with the Pros’ kiosk, where fans can pick their favorite Cowboy’s players to take a picture with and print out to take home.

Tired of waiting in long lines for a drink? Biometric screening is changing the way NFL fans enter stadiums and purchase refreshments on gameday. The pioneer of this technology in the NFL is CenturyLink Field, home of the Seattle Seahawks (and MLS team Seattle Sounder) who started to implement CLEAR technology into the stadium, to streamline the fan experience and improve their overall security measures throughout the venue.  CLEAR’s technology was originally built for airport terminals, but the use cases apply very well in an NFL stadium. In addition to creating CLEAR security lanes outside the CenturyLink Field, Seahawk fans who register as CLEAR members can now buy food and drinks, and simultaneously prove that they are of legal age for alcohol purchases, all with just their fingerprints. 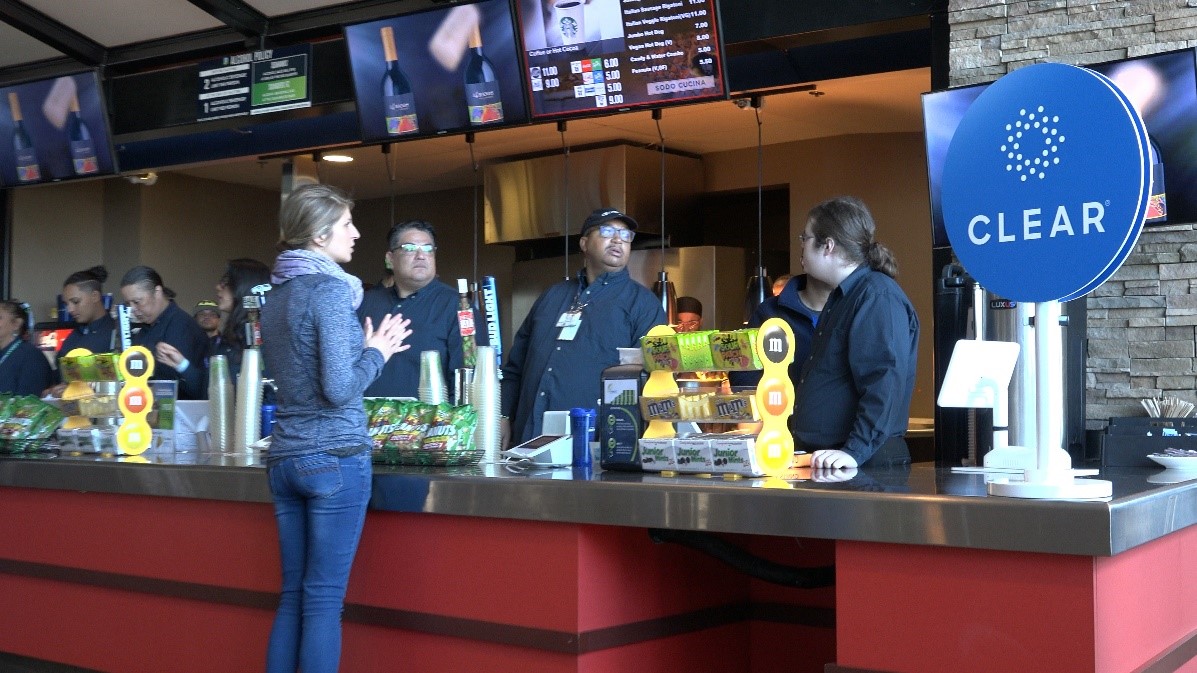 “As we continue to pursue enhancements to the fan experience at CenturyLink Field, our partnership with CLEAR has enabled us to provide a new service to the 12s not only for faster entry, but also as a new option to buy food and verify age for alcohol purchases with only their fingertips.” – Chip Suttles, VP of Technology for the Seattle Seahawks

As the first team to implement biometric screening technology in the NFL, CenturyLink Field and Seattle Seahawks repeatedly look for innovative ways to improve the game day experience, increase convenience, and deliver more value to their fans on game day.

Mobile ticketing isn’t necessarily a new technology, but it’s as critical (and emphasized) as ever in the NFL.  Mobile ticketing is not only an environmentally friendly route for the team and their stadiums, it reduces the potential risk of fraud. At the beginning of last season, the NFL announced Ticketmaster’s ‘SafeTix’ would be deployed in 27 NFL stadiums, giving each buyer a specific barcode that has the capability to refresh every few seconds, eliminating the likelihood of screenshots or other copying methods.  Digital tickets have also become a hot commodity since they eliminate the hassle that comes with printing tickets.  Purchases are easily accessible through the touch of a screen.  Now more than ever, customers are utilizing mobile ticketing through their phones as a convenient way to gain access into the stadium – and other exclusive offerings, often inherent in native ‘game day’ team applications.

For the League and NFL teams, mobile ticketing helps organizations better understand who is attending NFL games and how NFL season tickets are bought/transferred in the secondary market.  These insights account for one piece of the fan engagement and fan segmentation pie, but it’s a vital one.  Because of these factors, mobile ticketing isn’t going anywhere.  So much so, Super Bowl LIV in Miami may have been the last ‘Big Game’ with paper tickets.  More to follow there next year.

Wi-Fi coverage and capacity demands grow every year and every season; this is especially true for NFL stadiums, which experience heightened density and bandwidth challenges when delivering Wi-Fi connectivity to tens of thousands of fans simultaneously.  The number of users, devices, and applications connecting to Wi-Fi and how we’re relying on Wi-Fi networks – like increased engagement with streaming/on-demand video, increased number of IoT devices accessing the network, for example – is only rising and doesn’t appear to be slowing down in the near future.  Take the most recent Super Bowl, which saw a record-breaking 26 TB of data transfer across the Wi-Fi network, as well as hitting the high-mark for average usage per connected device (in MB).

While the Super Bowl is an exaggerated use case, there are well-documented examples of these usage trends across NFL stadiums (among other professional sports Leagues and college athletics).  To address the growing demand for bandwidth, stadiums are deploying purpose-built Wi-Fi 6 solutions.  Among its many benefits for enabling a strong digital experience in high-density stadium environments, Wi-Fi 6 better handles fans’ mobile behaviors today and provides NFL teams with a strategic business asset to leverage moving forward.

Inflection Points Episode 6: The Rapid Evolution of Esports
Actions Speak Louder than Words – Alan Faneca
Transforming IT Departments into Revenue Machines
“The Heart of the Team,” Larry Csonka shares his Journey in the NFL
Master Your Guest Onboarding Process For Superior Customer Experience